Switched at Birth is about to tackle a question posed by the Bee Gees some 40 years ago: How can you mend a broken heart?

Vanessa Marano’s Bay, grappling with the end of her relationship with Emmett, will explore some good old-fashioned emotional spiraling as one possible answer when the ABC Family drama returns tonight (8/7c).

“Bay is not coping,” executive producer Lizzy Weiss tells TVLine with a laugh. “Bay is being terrible. I wanted to be real to this whole heartache of being broken up with unexpectedly — especially at that age, but at any age — [and] dive into the sadness and the hurt and confusion and the replaying in your head again and again of, ‘What happened? What went wrong? What could I have done differently?’ I just thought seeing her spin out would be so real.”

Below, the EP also reveals why Emmett is not as devastated as his ex and previews the “roadblocks” ahead for Daphne and new beau Mingo. Plus: Who’s preggers?!

TVLINE | Is Emmett able to shake off the break-up a little bit more than Bay?
Yeah. Since he was the break-upper and not the break-upee and secondly because he’s a guy, I do think he’s having an easier time initially. Guys tend to compartmentalize better than women and they push off the pain of being broken up so much later, often when the girls are over it. [Laughs] So there’s just that timeline issue.

TVLINE | Bay and Emmett share so many friends. Do these folks get stuck in the middle?
Absolutely. They try not to, but that is exactly the stickiness of this break-up when they’re wound up in each other’s lives. There’s Daphne, who has to take a position. There’s Travis. Those are the two kids in the middle. And then the parents. Melody’s going to be a little bit in the middle because she loves Bay, but Emmett is her son.

TVLINE | What does that mean for Daphne and Emmett’s friendship? They go back a long way, before Bay came into their lives…
They do. It’s a problem. They started off inseparable, best friends for life when we met them in the pilot. They hit some rocky times. Emmett was very angry with Daphne for letting Bay take the fault for her. Now we’re going to see if things are going to flip or if she’s going to try to play mediator between them.

TVLINE | Obviously, there’s some post-break-up wallowing that needs to be done. But will Bay and Emmett date other people this season?
Well, Emmett did have a close friendship with Skye, and we’ll have to see if that is one that is going to turn. They’re in school together and sharing a passion for film. We’re certainly not going to see Bay wallow for 10 episodes. We are going to get her back on her feet. The campus assault story is still with us in terms of the emotional fallout from that… She has a double challenge ahead with her broken heart and in terms of sex. Is she going to be able to go back to any kind of intimate relationship when her last experience was a negative one? 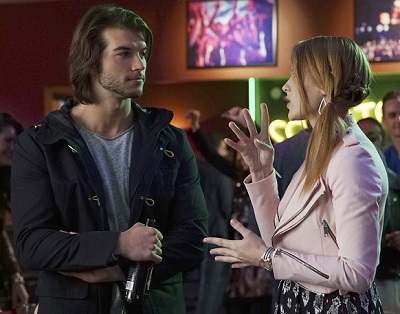 TVLINE | While Bay is going through this tough time, is Daphne just in Heaven with Mingo?
I wouldn’t say she’s in Heaven, meaning they are very, very different people. But yes, we do take some time to have Daphne explore a healthy relationship with a young man her age. [Laughs] She’s had a lot of bad experiences with guys who were not cut out for her. We just thought it was time to give her something good in her life and have a romance with a guy who is unexpected for her. Even though she chased him, she was chasing him for reasons of status and lust, the cool guy down the hall. Once she kind of gets him, there is going to be some struggle in that he’s an athlete who doesn’t take school that seriously. There are a lot of roadblocks ahead of them, but it’s fun to watch them navigate it.

TVLINE | Burning question time: Why is Toby crying in the trailer? Should we be worried?
[Laughs] I don’t know about worried. Toby is not happy in the premiere. He’s pretty angry at Lily. He’s reeling from finding out that she had feelings for a colleague, and he feels completely burned by that… Toby goes through some stuff this season.

TVLINE | One of the episode descriptions says there’s an unexpected pregnancy.
It is unexpected. It does define the season in a lot of ways for the family. And you will find out in the premiere who it is.