Question: Is this finally going to be the Arrow season that Felicity Smoak gets a code name to help protect her identity? —Julie
Ausiello: We took your Q to executive producer Wendy Mericle, who admitted that there’s a running joke in the writers room about what Felicity’s alias would be if they were to give her one. But at the moment, the tech wiz isn’t getting a second moniker. “Dig is out in the field, so there’s a necessity for [him to have one],” Mericle explains. “But not quite yet for Felicity, although you never know. We all love the idea of her getting her out there more and being a badass. It’s just a question of finding the right way to do it.”

Question: Can you please find out if The Good Wife will be bringing Robyn back this season? With Kalinda gone, Lockhart Agos Lee needs a new investigator. —Maddie
Ausiello: Series co-creator Robert King would love to make that happen, but he needs your help. “Can everybody write Jess Weixler and get her to move to New York again?” chuckles the EP of Robyn’s L.A.-based portrayer, before further explaining that budget restrictions preclude the show from “flying her out for every episode” — at least for the time being. “Jess is amazing,” King adds, “and things may change; they always do.” In the meantime, Jeffrey Dean Morgan’s freelance investigator character will fill the Kalinda void at both Lockhart Agos Lee and Alicia’s fledgling new practice, a juggling act King says “is going to cause some strain” between the rival firms.

Question: I can’t wait for Season 13 of NCIS, please give me some scoop on our lovable Abbys (Sciuto or/and Borin). –Ann
Ausiello: There are no plans (yet) for another visit from Diane Neal as Abigail Borin, but we have better news regarding the other Abby: Episode 5 of the new season features what show boss Gary Glasberg touts as “an Abby/Die Hard story,” where the forensics whiz, all alone in a lab, “must use her wits” to save the day. One out of two ain’t bad!

Question: Will fans of NCIS: LA’s Deeks and Kensi get to see their relationship develop more through Season 7? —Tony
Ausiello: That would be a definitive yes. “Things must be getting serious if he makes the choice to introduce her to his mom (played by Pamela Reed),” says Daniela Ruah, who plays Kensi. “Throughout that episode, Deeks gets calls on his phone, he doesn’t tell Kensi who it is, he doesn’t pick up… so you can see he’s making the decision about whether he wants to take this step or not. And then he ends up taking it,” previews the actress. “I like that they’ve made it a thought-out decision.”

Question: Anything new about Castle? —Rachael
Ausiello: As part of the Season 8 plan to present twentysomething Alexis as “a young woman as opposed to a child,” Rick’s daughter will find an influential new mentor, in Scotland Yard alum-turned-security specialist Hayley Shipton (played by new series regular Toks Olagundoye). “Hayley is going to help Alexis find herself,” says co-showrunner Terence Paul Winter, who sees the two sharing “a different kind of energy” than when Alexis interned for M.E. Lanie. “What we’ve shot with [Alexis and Hayley] together is magic, it really is.”

Question: Any spoilers on Chicago PD? Can’t wait to see what happens with Erin and Jay. —Tara
Ausiello: Not much is happening — at least romantically — between them at the start of the season, since Erin is still spiraling from last May’s cliffhanger. Jay is “just worried about her surviving,” executive producer Matt Olmstead tells TVLine. “Then once she gets her feet [back] under her, we may have the romance kick back in.” May?! Clarifies Olmstead: “I’m pretty sure it’s going to kick back in.”

Question: In light of Nadia’s death on Chicago PD, it seems like the perfect time for Erin and Kelly on Chicago Fire to reconnect and bond, especially as friends. It was a great bridge between the two shows as they had such great chemistry. Is there any chance of that? —Alice
Ausiello: A reunion is highly unlikely considering Kelly is getting a new love interest (played by Continuum‘s Rachel Nichols). After getting demoted from his lieutenant position, the firefighter “has to go to a management trainee [program],” executive producer Matt Olmstead previews. “There he meets [Nichols’ character]…who is also a troubled manager at her law firm. They’re kindred spirits who meet, essentially, in detention, and there’s a romance there that turns into a fairly large complication going forward.” 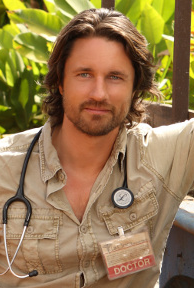 Question: Did you ever find out if Martin Henderson will be playing his Off the Map doctor character on Grey’s Anatomy? —Jenny
Ausiello: “Absolutely not,” Shonda Rhimes maintained when I presented her with my synergistic conspiracy theory at TCA press tour. BTW, Rhimes also noted that Henderson’s new MD will not be checking in until late fall.

Question: Will Einstein return on Criminal Minds? –Emilie
Ausiello: There are no plans at this time to bring back the forensics whiz (played by Aquarius‘ Candace Hammer) that Reid met in February — though Matthew Gray Gubler is currently “hopeful” that his brainiac lands a(ny) new girlfriend “in the future.” Alas, neither has the crime drama been able to follow through on its wish to revisit Reid’s mother, now that Hollywood Game Night host Jane Lynch also has a new comedy (Angel From Hell) on CBS’ fall chedule. As show boss Erica Messer laments: “We never seem able to get her!”

Question: Any word on a second season for Sense8? —Sam
Ausiello: Five words, actually: Get. With. The. Program. Sam.

Question: Got any scoop on Scorpion? —Shon
Ausiello: Yes, but promise me you won’t breathe a word of it to Paige. Episode 6 will find Walter getting aggressively pursued by a disarmingly beautiful woman at a hotel bar. But wait, there’s a catch! The hottie in question is later suspected of planting a worm in a security system Walter is designing. In other words, she probably was just pretending to be interested in him. So it’s cool if you wanna tell Paige.

Question: Anything you can give us about Bones? —Deborah
Ausiello:  Trouble’s afoot for Cam and Arastoo. “In the six months since Brennan left, Arastoo has pretty much been the main person taking over the lab,” executive producer Michael Peterson previews. “With everything [that happens] in the first two episodes, it’s going to be a challenge for their relationship.”

Question: Can you give us Marc and April fans any scoop on Mistresses‘ Season 3 finale? —Semaj
Ausiello: First, the good news: Remember the dreamy look that the newly single April got on her face while watching Marc assemble Scotty’s school project at the end of Episode 11? The show plans to explore that further. The bad news? We asked executive producer K.J. Steinberg which is the biggest risk to the odd-couple roommates’ potential romance — the fact that Marc never told April about his alcohol relapse or the fact that his sister was the woman for whom April’s first husband feigned his death to start a new life in Florida? “The secret lapse would definitely be more of a threat,” Steinberg says without hesitation. “Miranda, you know, isn’t really family [to April], so that hasn’t been an issue for either of them.” Marc’s battle with the bottle, however, will play into the final two installments of Season 3 — so don’t expect everything will be coming up glue sticks-and-cardboard for the duo.

Question: Is there any hope that we will see Once Upon a Time‘s Robin Hood in a new adventure? When I heard Merida was coming (played by Amy Manson), I immediately thought that she would somehow end up related to him. –Chris
Ausiello: “We are going to see his adventure side,” series cocreator Eddy Kitsis answered when Matt Mitovich delivered your Q. As for the other ace archer entering the series’ mix, “Robin does not have a connection to Merida,” Kitsis said, “but he will intereact with her.”

This AAnd That…
♦ Here’s a little exclusive tidbit about CSI series finale: Michael Beach (ER, Sons of Anarchy) will guest-star in the two-hour swan song airing Sept, 27, playing a Harbor Patrol officer who arrests a boat owner in the port of San Diego.
♦ I’m hearing Flash Season 2 will drop some clues about Iris’ MIA mom.
♦ How to Get Away With Murder‘s second season will waste no time solving the mystery set up in the finale. “We’re going to learn who killed Rebecca in the premiere,” shares series creator Pete Nowalk, who says viewers can count on the series to once again play with time and structure. As such, Katie Findlay will remain a presence on HTGAWM, despite Rebecca’s death. Confirms Nowalk: “We will see Rebecca again.”