Blanca’s killer, Taylor’s side piece, the fate of the Powells’ marriage and more will be revealed Monday (Lifetime, 9/8c) in what Rebecca Wisocky calls the most “explosive” episode of Devious Maids yet. (Any chance she also meant that literally?)

“The world as you know it will change in Beverly Hills,” Evelyn’s portrayer tells TVLine. “There are at least three different cliffhangers, and several lives will be in the balance.”

One such “change,” as revealed in previews, is the Powells’ potential divorce, spurred by the loss of Dion.

“Evelyn died inside when Barrett died; time stopped for her, emotionally,” Wisocky explains. “She re-entered a place of hopefulness and exuberance and youth when Dion came into her life, so that being taken from her really might be the final straw for the Powells. She’s forgiven Adrian for just about everything over the past few seasons, but this takes the cake.” 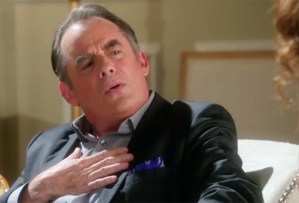 But don’t worry about Wisocky losing Tom Irwin as a scene partner. She says they were both “horrified” by the prospect of their characters divorcing at first, but after giving it some thought, that horror changed to excitement.

“If the Powells should divorce, I’m sure they’ll remain as obsessed with each other as they are now,” Wisocky says, adding that she can already picture them peering into each other’s windows. “I trust the writers and their sick imaginations to take us in a fabulous direction, whatever that is.”

I’m pretty sure Wisocky speaks for the entire Devious Maids fandom when she says, “We need to get a Season 4 so that all of these things can play out!”

Who do you think killed Blanca? Would you like to see the Powells go their separate ways? Drop a comment with your hopes and fears about Monday’s finale.