Hannibal, old friend, you kinda lost me this week.

Look, I know Raul Esparza’s Dr. Frederick Chilton is vain, haughty, inept, smarmy, malicious and all sorts of other unpleasant adjectives. And I’ll admit I didn’t feel the slightest hint of sympathy when the dude had some of his organs painfully removed by Abel Gideon in Season 1 — or when Chilton took a bullet to the face (fired by the deeply addled Miriam Lass) in Season 2.

But there’s a difference between letting out a hearty chuckle at the end of the big-screen The Silence of the Lambs — you know the scene, in which Dr. Lecter tells Clarice via phone that he’s “having an old friend for dinner” (all while spying on a vacationing Frederick) — versus watching the guy have his naked body glued to a chair, get his lips ripped off by a sociopath with the world’s worst set of dentures and then flame-broiled into a mumbling pile of exposed teeth, charred skin and blood-red muscle and sinew.

This may sound like a silly complaint in a Hannibal recap. I mean, for three seasons now, this has been a show that has triumphantly sat at the intersection of beautiful and ghastly, has married the macabre with the meditative. And much of the imagery here comes directly from Thomas Harris’ novels. Furthermore, I’ve been completely obsessed with nearly every minute of it (or, to be more specific, Seasons 1 and 2, and much of the Tooth Fairy arc of Season 3). 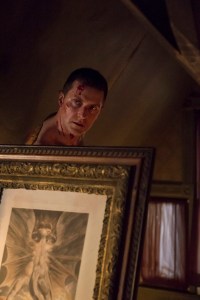 But my problem with Francis Dolarhyde’s physical and psychological torture of Chilton in “The Number of the Beast is 666” is that, unlike so many of Bryan Fuller’s beautiful nightmares these past few seasons, the indignities suffered by Chilton were merely gruesome and upsetting — without being particularly scary or insightful. If I wanted to spend an hour watching a guy whimpering for his life — and then being unceremoniously mutilated — there are plenty of torture-porn flicks like Saw or Hostel or whatnot available on demand. I expect Hannibal to be smarter, better, funnier, more inventive. Heck, with only one episode left before the series finale, the general ickiness and the multitude of plotting issues in this installment left me feeling like even another murky existential conversation between Will and that Apparition Abigail doll would’ve been more enthralling.

Maybe it’s just me? (You should certainly feel welcome to pop an ice pick into my brain and cook my lungs — verbally speaking — down in the comments.) Either way, let’s pithily recount the week’s major developments:

* Will, Jack and Alana — along with Chilton — decide to bait the Tooth Fairy by planting an article in Freddie Lounds’ rag, in which Will and Frederick portray the nation’s hottest serial killer as “a vicious, perverted, sexual failure — an animal,” not to mention “the product of an incestuous home.”

* Chilton visits Dr. Lecter and pouts that Hannibal’s recent articles in the Northern Medical Journal of Psychiatry have refuted the insanity defense he’d concocted to save the cannibal’s life. Chilton goes on to paint a picture of a late-in-life Hannibal being turned out to the general population, then used for sex by younger inmates and crying over his dislike of the psych ward’s stewed apricots. (OK, maybe Frederick had it comin?) 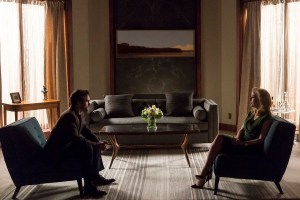 * We get several instances of Will in “therapy” with Bedelia. In the episode’s opening scene, she seems oddly turned on in when she tells Will that Hannibal only wants her dead by his own hand — and only if he gets to eat her when she’s done. (Du Maurier is one loco chick — and Gillian Anderson’s performance remains as deliciously twisted as anything on TV, no?) Most interesting of all, though, she verbalizes her theories about the twisted Will-Lecter connection that’s spawned a lot of internet ‘shipping, but has never been more than subtext in the series. Bedelia posits that Hannibal “finds nourishment at the very sight of Will” — then asks her “patient,” “but do you ache for him?”

* The FBI plan goes awry when Francis doesn’t come after Will — instead, he targets Chilton, who winds up glued to a chair and begging for his life. At one point during Chilton’s captivity, Reba stops by to visit “D,” and while she can’t see the victimized therapist, you get the impression the blind woman senses another (possibly terrified) person in her presence. After she leaves, the Tooth Fairy plays a slide show of his horrific works for Chilton, makes him recant his damning assessment of the Red Dragon on camera, rips off Chilton’s lips with his teeth, then reenacts Will’s faked “Freddie down the hill” inferno using Chilton and a can of gasoline. 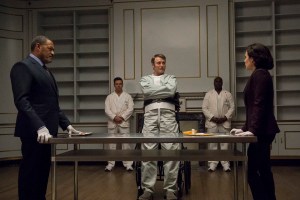 * Inexplicably, when a package arrives at the hospital for Lecter, Alana brings it to him to open — rather than examining the contents beforehand. It’s a note from Francis — “With these, he offended me” — accompanied by Chilton’s torn-off lips. Hannibal scarfs one down with the wickedness and enthusiasm of a toddler sneaking a Gummi bear before dinner, then makes a keen observation to Dr. Bloom: “You could’ve provided anything Dr. Chilton could. That would’ve been your lip I was tasting — again.”

* Chilton, charred and mutilated, accuses Will of setting him up — Will, after all, put his hand on Chilton in the photo for Lounds’ spread, making him the “dog” whom the Tooth Fairy would strike against first.

* It’s clear from Will’s final session with Bedelia that he’s — in the words of Britney Spears — not that innocent.

Bedelia reckons that Will wanted to see what would happen to Chilton, and then — hearkening back to her own murder-spree-by-proxy Italian tour, adds, “You may as well have struck the match — that’s participation.”

* Meanwhile, Francis kidnaps Reba — binding her, gagging her and bringing her back to his lair. Her prior words — “I’m not so scarred by life that I’m incapable of love. I hope you aren’t, either.” — come back to haunt her, as Francis confesses he’s the Red Dragon who’s been making headlines by “changing” (the new PC term for “slaughtering”) families. His imaginary wings spread wider and more glorious than ever — and we know now he’ll either scorch everything in front of him, or wind up slayed by a valiant (albeit fragile) knight.