Let’s get the biggest twist out of the way first: Emma has an older sibling, a brother or sister who could very well be the person killing everyone she cares about (and also Nina). It turns out that “Daisy,” in an act of rebellion against her cheating boyfriend, slept with Brandon James, then left town so she could complete her pregnancy and give the baby up for adoption.

(Side note: Didn’t Emma also have a boyfriend who cheated on her with the most popular girl in school? My, how history loves to repeat itself.) 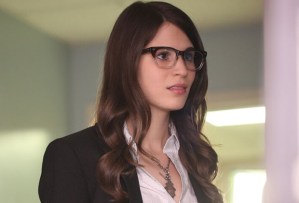 Color me crazy, but that first revelation has to be connected to the second-biggest surprise of the night: Piper, the bespectacled podcaster who somehow remains un-stabbed, has major daddy issues. Sure, that might not seem like anything special — after all, having daddy issues is a prerequisite for all characters on this show — but there was something about the way she referred to her dad “never coming back” that has me thinking: She must be Brandon James’ daughter, and Emma’s older sister, right? Frankly, the only reason I even question that theory is because it feels too obvious at this point.

Speaking of parents who are just the worst, Brooke’s dad finally told her the truth — or his version of the truth, at least — about that body he was seen moving in the security footage. Apparently, and I’ll remind you that this is all according to Brooke’s dad, the body belonged to a man who O.D.’d in their house; he was a friend of her mom’s and didn’t have any identification on him at the time. In order to avoid a scandal, which apparently worked real well, he disposed of the body and sent Brooke’s mom off to rehab. Pssh, a likely story.

And then there’s good ol’ Seth Branson… or should I say Seth Palmer, the original name he used when his teenage girlfriend was murdered at his previous school. That little identity reveal, coupled with the bloody knife Noah and Audrey found in  Palmer’s classroom, landed the touchy teacher in handcuffs — and right in the middle of hookup-turned-bloodbath with Brooke. (Either way, dude’s guilty of something.)

All right, it’s time to lay your theories on me: Is Piper the daughter of “Daisy” and Brandon? Is Brooke’s dad lying about the O.D.’d corpse? And isn’t Seth a little too obvious to be the real killer? Drop a comment with your latest hypotheses below.