Never trust a pretty face, Teen Wolf fans — especially one you haven’t seen since middle school, then suddenly resurfaces and tries to break up your pack of supernatural besties. (That’s a relatable teen problem, right?)

Anyway, Theo’s plan to topple that house of hormonal cards known as “Sciles” finally came to fruition in Monday’s episode as the Dread Doctor groupie ratted Stiles out to Scott, making Donovan’s murder sound way more brutal — and far less defensive — than it really was. For good measure, Theo told Papa Stilinski that he killed Donovan in an attempt to rescue Stiles, thus earning the sheriff’s trust (and a weird locker-room hug.)

Cut to Scott and Stiles, screaming at each other in the rain about the proverbial line now drawn between them. “How do we fix this?” Stiles eventually asked, which I felt was the perfect segue for a Notebook-style embrace, but no such luck. Instead, they just kind of awkwardly changed the subject, though I have no faith that their bromance is in any kind of fit shape at the moment. 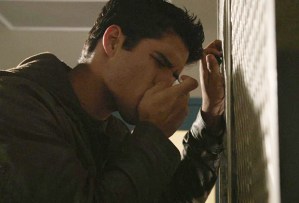 In fact, the newfound rift in Scott’s friendship with Stiles was also the final nail in the coffin of his confidence. He didn’t even feel safe biting a dying Hayden, an act that would surely save her life by turning her full-werewolf. (“Maybe she’ll heal,” Theo suggested, as if we can trust anything that he says ever again. You know what? I’m officially demoting him back to Mike Montgomery as of… right now.)

THE BEST LAYDEN PLANS | Speaking of Hayden, is anyone else getting major Twilight vibes from her scenes with Liam? No longer shall I refer to her as Baby Selena Gomez; she is, now and forever, Baby Bella Swan. And there’s an innocence about Hayden and Liam that I really dig, which is why I did not enjoy watching her get stabbed in the neck by that Dread Doctor. That said, the unfortunate event did trigger my first real theory of the season: Since I refuse to believe the show would kill off Hayden after spending all that time establishing her relationship with Liam, I’m guessing Theo will give her the bite, thus beginning his own pack. … Come to think of it, was that his plan all along? To use the Dread Doctors to make scientifically modified supernaturals for his new pack? Did I just (finally) figure out Teen Wolf?!

PROGRESS WITH PARRISH | Silly me, I actually started to get my hopes up, thinking we might finally discover Parrish’s supernatural origins this week. To the show’s credit, we came closer than ever before — we can hypothesize that he exists to cover up supernatural disasters from the outside world — as his and Lydia’s stroll through the forest proved most eye-opening. Plus, am I the only one who thinks that fight scene was kind of hot? Don’t get me wrong, the age difference is suspect, but I’m sure many of you still root for Aria and Ezra to get back together on Pretty Little Liars, so let’s not even go there.

Your thoughts on this week’s episode? Any new theories about Parrish’s species, Theo’s connection to the Dread Doctors or the future of Scott and Stiles’ friendship? Drop ’em all in a comment below.