Which Once Upon a Time heroine is getting a Brave buddy? What’s the latest on Castle‘s mom and dad? Is Arrow‘s Canary still getting black-and-blue? Read on for answers to those questions plus teases from other shows.

Next time you speak with Once Upon a Time creators Adam and Eddy, can you ask them about Belle’s storyline for Season 5A? Even a small hint would be greatly appreciated. –Betsy
Your wish has been granted! “We’ve always wondered what would happen if Belle and Merida went on an adventure together…,” EP Adam Horowitz shares. “We hope you do, too, because it’s coming!” P.S. On a related note, everything I heard from the cast at Comic-Con suggested that Amy Manson really “hits the bull’s-eye” as the Brave heroine. Bonus scoop: For Episode 5, Once is casting the possibly recurring role of Sir Lionel, a distinguished knight who sits at King Arthur’s Round Table and is a single father to his 13-year-old daughter, Violet.

Getting anything on Arrow‘s Laurel Lance/Black Canary storyline for Season 4 is like pulling hens’ teeth. Have you heard any spoilers about Laurel that are not Sara- or Quentin-related? –Apple
Since you asked so nicely…. Laurel is “fully arrived as Black Canary when we come back [on Oct. 7],” co-showrunner Wendy Mericle previews. “There’s no more learning curve.” But there are still struggles for Laurel as a costumed crimefighter. For one, “She has a secret identity; how does she grapple with that? And she’s an ADA, so what kind of impact is that going to have on her decisions as Black Canary — and vice versa?” 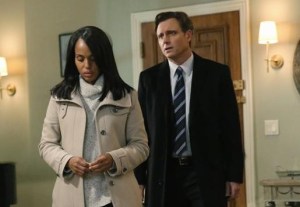 in an interview during Scandal Season 1 or 2 that she always wanted to write a presidential divorce. Will we finally see this play out? –Bevo
Make of this what you will: During ABC’s “TGIT” press tour panel, I asked Rhimes if she had “any interest in” – not whether she was planning on — writing a storyline about “Olivia Pope as First Lady”, and she flatly responded, “We don’t comment on future storylines.” Hmmph. But later during a 1-on-1 at ABC’s party, without hundreds of press members staring her down, the uberproducer allowed that the “concept is intriguing. That’s all I’ll say.”

I read in an interview that since Chicago PD premieres first, they will resolve the storyline of Casey being kidnapped on that show, instead of Chicago Fire. Is that still the plan? –Chris
Nope. Even though P.D. premieres before Fire, the firefighter’s storyline will not be addressed on the spinoff. “We operate a little bit in a separate universe” when P.D. returns, executive producer Matt Olmstead tells TVLine, likening it to a “detached timeline.” “We were mindful to not have too many of the characters from Fire on P.D. because that’s a little weird if they’re at Molly’s having drinks. Then why aren’t they talking about where Casey is?”

Any scoop for Martha on Castle? –Barry
Co-showrunner Terence Paul Winter told me that although Martha has moved out of the loft and has a newly thriving career when Season 8 opens, “She’s very much a part of Castle’s life. Don’t think that just because she now has her own place and is doing well on Broadway that we’re not going to see her sharing her wisdom with her favorite and only son.”

Please, please say that Castle‘s Dad will be back sometime during the new season!? –BG
Would you settle for “He is mentioned in the premiere”…?

On The Flash, will see more of Iris as the investigative reporter? –Carrie
Iris will be coming into her own as a journalist in Season 2 (premiering Oct. 6). “She has a really cool job, and she’s going to be standing on her own two feet a bit more,” showrunner Gabrielle Stanton previews. “She’s definitely going to be part of Team Flash more this season, and we’re definitely going to see more of her work life. We’re going to see her generate stories and be really proactive.” The EP then adds, “She’s struggling with the loss [of Eddie], but instead of letting it get her down, she’s going to use it to become the woman that she knows Eddie would have wanted her to be.”

Will Teddy Sears be recurring on The Flash, or a series regular? –Lashae
Sears is recurring as the first speedster, Jay Garrick.

Is JJ’s husband Will coming back this season on Criminal Minds? We really miss him! –Patricia
There are currently no plans for Josh Stewart to reprise the role, “but [JJ and Will] just had the baby,” piggybacking on A.J. Cook’s real-life pregnancy, showrunner Erica Messer notes, “so he might show up in an episode” down the line. 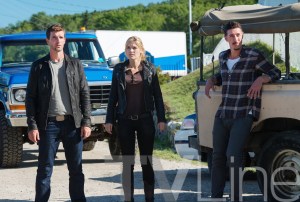 us in the dark about Haven Season 5B. Is there anything you can get your hands on? –Joel
‘Member that morsel of scoop I shared along with the first photo from 5B? Well, here is the complete teaser from showrunner Matt McGuinness, for you to parse and process: “The tsunami of troubles brought by Duke has Haven-ites locked down for their own safety. The town is a war-zone, with troubles shutting off entire neighborhoods. Fortunately, Audrey and Nathan are locked down together, which is nice for them. Even in this maelstrom, they work seamlessly to protect they town they love. But, as the season progresses, they must take some dangerous solo missions — especially hard as they seem to have grown closer than ever….”

Any scoop on Jake and Amy in the upcoming season of Brooklyn Nine-Nine? – Lauren
“We get to see Jake and Amy navigate their new status, and what that means, and it’s not necessarily all smooth sailing,” Melissa Fumero told me, adding that the arrival of the new captain (played by this person) “plays a part, yes” in perhaps complicating the couple’s future. That said, the change in leadership at the 99 “isn’t even the most exciting, crazy thing that happens in the [Sept. 27] premiere,” Fumero asserts. “It’s a twisted episode!”

I’m wondering it Sesame Street‘s new arrangement with HBO affects their deal with Amazon Prime. Elmo is very important in this household and a big perk of our Prime membership. –Lauren
You would be correct to wonder. Both the new episodes (premiering on HBO this fall, then hitting PBS nine months later) and the 150 or so “library” episodes the pay cabler has licenses will be exclusive to HBO and its assorted services.

Now that we’re in 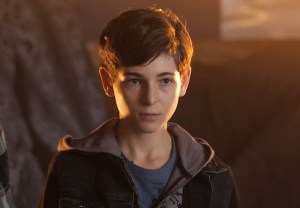 Season 2, will Gotham still keep up the Thomas and Martha Wayne investigation, or will the show move on from that? –Sofia
I hand-delivered your question to Bruce Wayne’s portrayer, David Mazouz, who said that the series-launching murder mystery “will be an ongoing thing” throughout Gotham‘s run. “Gordon’s not really looking into it that much anymore, but Bruce is,” the teen said. “The Top 3 things that are on Bruce’s list are: take down the corrupt side of Wayne Enterprises, find out who his father really was, and find out his parents’ murderer. And they’re all connected.”

In Season 3 of Reign, will Catherine be in English court with Elizabeth? I love Megan Follows and want to see Catherine scheming and plotting. –Andrea
Seeing as Season 3 is “the season of the three queens” (Catherine, Mary and Elizabeth), it appears you will be satisfied. Especially seeing as Catherine, who had a fall from grace last season, will use every means necessary to claw her way back to power, including capitalizing on her alliances in other countries.

Any word from HBO on if they will pick up The Devil You Know? –Theresa
I circled back with HBO just the other day and a decision has yet to be made about whether Jenji Kohan’s Salem Witch Trials-set pilot will go to series.

Are Callie and AJ over on The Fosters because of the whole Brandon thing? Or can we expect another new love interest for Callie? –Briana
“There could be potential for more of that [relationship] to play out” in Season 3B, David Lambert says. “But at this point, I feel like it’s sort of done.” After all, “The moms tried to nip the whole thing in the bud and end it before it really begins,” the actor points out. “A.J. also has his own things to worry about with his brother and his living situation.”

ABC confirmed in December of last year that they were developing a miniseries based in Ken Follett’s bestseller Fall of Giants. Is there any news about the cast or release date? –Elizabeth
Oh, we’re a ways from that just yet. When I brought your Q to ABC president Paul Lee on Aug. 3, he had just received the first script and was “looking forward to reading it,” he said. “Apparently it’s very good.”