If you watched the first few episodes of Food Network Star‘s 11th season and thought, “They might as well advance this Eddie Jackson fella directly to the finale,” you were not alone.

Jackson himself admits that his strong start — the judges loved his food almost as much as his on-camera charisma — had him thinking, “I could actually win this thing.” But after the former NFL pro and MasterChef vet made a few stumbles midway through the season, he realized the competition was “so much harder than I thought it would be. Food Network Star is all about you — your personality and your cooking skills. It’s not about a team effort. You win or lose based entirely on your own performance.”

TVLine caught up with Jackson the morning after he was named the Season 11 champ — a win that’ll lead to his road-tripping series BBQ Blitz premiering in October — to discuss his pre-Food Network life, his sudden shift from Caribbean fare to barbecue and any hot water he might’ve gotten into with his girlfriend over the season-long discussion of his toned physique.

Your NFL career was cut short by an injury. Had you always planned on exploring food as your post-football field?
I’ve been cooking my whole life — but I had to do some soul searching [after my injury]. I retired at only 28 years old. I had my whole life ahead of me, and there was this question, “What am I gonna do now?” My dad was like, “What do you love to do?” And I said “I love to cook.” “Well do something with that!” That made all the sense in the world. I practiced and worked on my skills, and it led to where I am today.

You owned and operated a food truck before your stint on Food Network Star. That sounds fun, but also grueling.
I started to cater events in people’s homes and ended up getting a food truck, Caribbean Grill. We specialized in doing events — big barbecue grilling on people’s porches — as opposed to a traditional food truck you see on the streets. I’m a personal trainer and have a gym as well — it would’ve been hard to go out every day with a food truck, too.

Why audition for Food Network Star now?
I watched Food Network Star from way back in the day — from Guy Fieri all the way through Aarti [Sequeira], Jeff Mauro and Damaris [Phillips] — but I never thought I’d do anything like that. A couple of years ago, though, I did MasterChef — I went on as a prank. It made me realize I liked doing TV, but I didn’t think I was built for the stress of doing reality TV again. Once I moved to Houston, I was sitting there watching Food Network and the teaser came on, “If you think you have what it takes…” I looked at my girlfriend and said, “I think I can do that.” And she said, “Then do it!” So I went to the auditions in Austin, TX, and the rest is history. 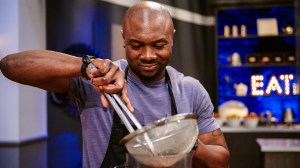 Your point of view changed quite a bit over the season. You started with the concept of Cheat Day, then gave that up and focused more on healthy eating and Caribbean flavors. How hard is it to narrow down one style of cooking?
I’m a personal trainer, but I just love food. So I was trying to figure out a way to combine the two things I love — food and fitness — which is where the “Cheat Day” concept came from. That said, I’m such a competitor and I don’t do anything half-assed, and Bobby Flay said something to me the second week: “Don’t worry about this Cheat Day — just worry about cooking good food every week.” And I decided that’s what I was going to try to do — along with having the best on-camera personality possible. Bobby opened my eyes. I threw the Cheat Day concept away. I still love the concept and I’m still very much about it on my daily walk, but I was trying to win. [Laughs] When Bobby freakin’ Flay tells me to do something, I’m gonna do it!

What’s the best meal you made during the season?
My first meal that I made – the chipotle shrimp with the avocado cream. We were all so anxious to cook, so excited and thrilled, and my focus was unbelievable. That dish came out amazing.

And if you had a chance for a do-over, which…
You don’t even have to finish the question: My Fourth of July meal, when we had the ingredient swap. I got all of Jay’s ingredients. I knew he was going to do barbecue, but he didn’t have all the ingredients I needed. So I tried to wing it with what he had, and it just didn’t come out like I wanted it to. And I’m a barbecue fanatic, and that’s why I was so disappointed [with the end result].

I have to ask: I really expected you to shoot a pilot where you’d be in the kitchen cooking Caribbean food — but you wound up with a culinary travel show called BBQ Blitz. Was there a lot of discussion with Food Network execs about that change? How did it come about?
We had nothing to do with that. It was one of those things, “This is what you’re gonna do.” Once I figured out what my pilot was going to be about, I thought, “Barbecue, holy crap, this is what I love.” When I auditioned initially, they asked me what I was into, and that was the first thing I said, “Barbecue.” And one of the very first memories I have of cooking was me and my dad on our patio out in our apartment, dealing with a small Weber grill, teaching me how to do steaks and how to smoke ribs, cover them in foil and baste. When I found out they gave me a pilot highlighting barbecue, I jumped through the roof. I was ecstatic.

Were you at all disappointed to not be in the kitchen cooking your own food, but rather talking to BBQ experts about their recipes and techniques?
I was excited, actually. I feel like one of my assets is being able to talk with anybody. Put me at a table filled with children or sit me down to play bingo with old folks. I’ve always been like that. I got it from my mom and dad — they’re the exact same way. Me being in a situation where I can highlight my attributes — talk to people, be social, get out, move around, be free, have fun — that really benefits me.

Have you started filming BBQ Blitz yet?
In a few weeks we’ll get everything going. But the finale just aired last night — I’m still getting my head around it.

You told an anecdote early in the season about falling for a Jamaican woman who introduced you to all these new flavors — I thought you said she was your wife but I wasn’t sure…
No, I’m not married! [Laughs] When I was in Miami, I used to go to PF Chang’s every day — there was a hostess there, she was Jamaican and I ended up dating her. She took me to Jamaica and that’s where I fell in love with Caribbean flavor. “Where has jerk chicken been all my life? Oh my gosh!” [Laughs] In Miami, sometimes it feels like you’re not in the U.S. I’d never experienced those flavors like that in my life — I took it and ran with it.

But you have a girlfriend now?
Yes.

Did she give you any grief for all the comments on the show from female judges and diners about your looks and your physique?
Absolutely not! She’s very laid back. [Laughs]

You also won a CiCi’s Pizza challenge where your jalapeño fruit dessert pie wound up on the menu. Did you get a chance to try it?
I went the very first day it was availabke. There’s a CiCi’s right around the corner from me — I walked in, “Excuse me, sir. Can I get the Eddie Jackson special?”

We’ve seen some real success stories from Food Network Star — and some winners who fade into obscurity. How do you plan to ensure you’re one of the winners with staying power?
If I’m gonna do something, I’m gonna do it all-out. I fully intend to take this opportunity and run with it. You only get this type of opportunity once in your life.

Any chance you’ll take your barbecue POV to the Caribbean?
In a perfect world, yes! Look at you, coming up with a new program! [Laughs]

Well, if not a series, then at least an episode of BBQ Blitz, right?
I think you might be on to something, brother!