In the criminal justice system (of ABC’s Mistresses)… things are getting wackier than a soundbite from (apologies for the next five words) Republican Presidential candidate Mike Huckabee.

Not only has Joss been formally charged with first degree premeditated murder, but she’s also being cruelly tortured by a combination of fluorescent lighting and muted prison blues that do absolutely nothing for her skin tone. Sure, Joss’ lawyer may have a jawline that looks like it was ripped from the pages of a Justice League cartoon, but I’m still concerned he might be incompetent (or worse, on Calista’s secret payroll). After all, let’s remember who hired him: Karen (AKA Our Lady of Righteous Indignation When Her Parish Priest Throws a Side-Eye at Her Disastrous Three-Way Relationship).

In other news: DANIEL IS BACK AND HE IS WEARING A HEATHER-GREY HENLEY. Let him take the stand on Joss’ behalf and the jury will be too distracted by his deliciously overt Assault With a Deadly Torso to come back with anything but a “Not guilty” verdict.

And if that’s not enough to make you pour another glass of sauv blanc and collapse face down in front of the couch, let me throw out another bombshell for good measure: Karen is pregnant. I’m pretty sure this is a terrible idea — both for the character and her hot-mess story arc — but then again, if it gets her back in an oversized church hat for little Thruple’s baptism, then all will be forgiven.

Did anyone notice Calista’s absence from this week’s episode, “What Could Have Been”? (Correct answer: “Who is Calista?” Yes, she is dead to all of us now — unless perhaps she donates half her net worth to Ari’s breast-cancer charity.)

With that said, let’s pithily recap the action: 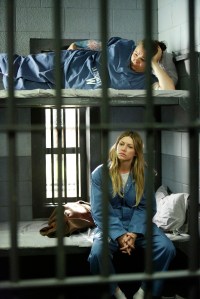 JOSS | I wonder how Calista would feel watching Joss get fingerprinted, mug-shotted, strip-searched and humiliated down at central booking? Like I’ve been saying the last couple weeks, yeah, the star fashion designer has an image to protect, but what kind of sociopath would prioritize PR over another human being? (I won’t ask about Savi — currently at an ashram in India — because like Crystal Pepsi, she ain’t coming back, folks)

Anyhow, Joss starts the hour recounting to her cellmate (a very good listener, bee tee dubs) how she’s being punished (cosmically speaking) for the beach makeout session with her ex-brother-in-law — but as she fantasizes about the sliding door she didn’t choose with Scott, she realizes that, for better or for worse, she was always going to crash into Harry with her mouth open, his mouth open, and their tongues most definitely turned up to ten/turned down for what. A guy like Scott who picks out your wedding dress and plans your surprise nuptials and buys you a Tesla was never really going to keep a bird like Joss happy — only caged.

As for Ms. Carver’s court case, it turns out that April (and her erstwhile FBI agent lover) prove to be more helpful than gunshot residue on Luca’s jilted model girlfriend or Calista’s creepy assistant/sometimes sexual plaything. More on that in a moment… 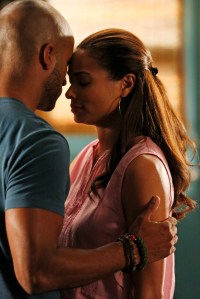 APRIL | April — motivated by concern for Joss, but certainly not forgetting the artwork she co-signed with Daniel’s netherregions last season, calls up her ex for investigative help while current beau Blair is out of town. He winds up getting some sort of verrrrry interesting footage from the security camera of one of Calista’s neighbors — but we’re not gonna be privy to that ’til next week — but suffice to say the hour ends with Joss’ lawyer cueing it up and smiling, “You’re gonna like this.” (Let me say that if Calista turns out to be the real killer, it’d be a plot twist I could most def get behind.)

Daniel, however, is kinda sorta secretly hoping that April is reaching out for more than his investigative prowess — and that hope gets fulfilled when they bawitdaba da bang a dang diggy diggy diggy all up in her living room. (In April’s defense, she may be cheating on Blair, but Daniel was wearing a heather-grey Henley, and that’s like sexual kryptonite, if that makes any sense.) When Daniel leaves his cellphone behind, though, April can’t check herself before she wrecks herself — going through his contacts like a suspicious wife, then realizing his total betrayal of her trust last season means she’ll never rest easy. She loves him — and he says she’s the love of his life — but she tells him this is goodbye anyhow. I can’t blame her for the decision — but I can throw a side-eye for her failure to (euphemism alert) “paint another wall-covering canvas” with the aspiring artist, can’t I? 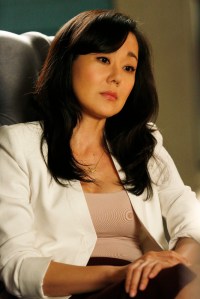 KAREN | It’s official: Karen has a bun in the oven, and even if the ingredients in the dough include alcohol, regret, insecurity, infidelity, a Latex allergy and several missed doses of her birth control pill, Karen wonders if this is a gift from God to her 38-year-old self. She winds up stressing about whether to share the good/bad news with Vivian and Alec — whose marriage is falling apart in her absence — but when her priest tells her the only moral option is to give the child up for adoption, Mama Karen (the one who confronted Calista on Joss’ behalf) resurfaces. The baby was “conceived in pure love” she hisses — even if that love was of the he-plus-she-plus-she variety. “You’re letting your emotions get the best of you,” retorts her pastor. To which Karen shoots back, “Thank freaking God!” OK, girl, go on with your bad self to the pharmacy to get some prenatal vitamins! I’m still not sure I want Karen The Mom as a Season 4 character — her crazy sex life will seem a little less fun when she has an infant at home relying on her — but if it makes her happy, I can’t be that sad. (And yes, that was a Sheryl Crow reference.) 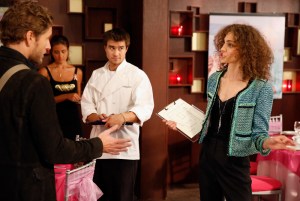 HARRY | April and Karen clue Harry in to Joss’ struggle — it’s Harry who gets up in Joss’ attorney’s grill and demands he do better — but his new talent agent complicates matters by putting him in charge at the last minute for a big-money breast cancer charity benefit. Ari rages against him for letting his personal stressors affect his work — she’s not wrong, as Harry almost bags on the event thanks to a single planned meeting with Joss’ lawyer — but in a surprisingly moving scene, we learn Ari’s hard-assed approach to the evening was a mask to hide her heartbreak over the loss of her younger sister to the dreaded disease. When Ari can’t finish her speech, Harry steps in, and they end the evening with a hug. But while Harry is in “hi, platonic friend, you could use a kind gesture” mode, Ari’s post-embrace facial expression makes me think she is interested in exploring “the land down under” (if I’m not being too subtle).

On that note, I turn it over to you. What did you think of this week’s Mistresses? Did you miss Calista? What do you think was on the flash drive Daniel gave to April to give to Joss’ lawyer? Share your thoughts in the comments!