The six-hour event series will continue that Tuesday and Wednesday, Dec. 15 and 16, airing each night from 8 to 10 pm.

Adapted by Matthew Graham (creator of BBC’s Life on Mars and Ashes to Ashes) and following the peaceful invasion of Earth by the alien Overlords who promise to eliminate poverty, war and sickness (hmmm…), the series’ cast is led by Mike Vogel (Under the Dome), Charles Dance (Game of Thrones), Daisy Betts (The Last Resort), Yael Stone (Orange Is the New Black), Julian McMahon (Nip/Tuck), Osy Ikhile (The Fear) and Colm Meaney (Star Trek: The Next Generation).

Leading out of Childhood’s End 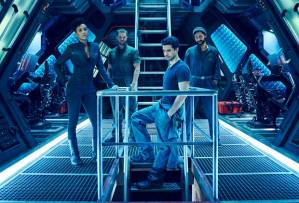 on its first two nights (on Dec. 14 and 15 at 10/9c), is the two-night premiere of The Expanse. Based on the best-selling book series set 200 years in the future, after mankind has colonized the solar system, the drama follows a hardened detective (Thomas Jane, Hung) and a rogue ship’s captain (Steven Strait, Magic City) who together tackle the case of a missing young woman, only to see it evolve into a race across the solar system to expose the greatest conspiracy in human history.

Following its two-night launch, The Expanse‘s 10-episode season will continue Tuesdays at 10 pm.

Which of Syfy’s two new adventures are you most excited for?