Pretty Little Liars‘ #SummerOfAnswers culminated Tuesday in what can only be described as the most answer-y finale in the series’ five-and-a-half season history.

In fact, the final hour of this half-season was such an info. dump, it’s probably just best to break down each reveal in bullet form. Ready? Let’s do this:

* First of all, it turns out that Charles is — drumroll please — CeCe Drake! She was obsessed with Alison, even considered her a living doll. (What the DiLaurentises thought was an attempted drowning was actually just Charles trying to give his lil sis a bath!)

* Mr. DiLaurentis wouldn’t buy Charles dresses, and when he found out Charles liked to play dress up in his mom’s closet, he stopped visiting him at Radley.

* The reason Mona appeared dead last season is because CeCe injected her with a freezing serum (which she injected Jason and Mr. D with in the finale.)

* Mrs. D bought the infamous yellow dress for Charles/CeCe when she turned 12. After that, whenever Mrs. D bought clothes for Alison, she also bought something for CeCe.

* Bethany pushed Toby’s mom off the roof of Radley because Charles/CeCe didn’t like her. (Hey, Bethany was just helping out her pal!) 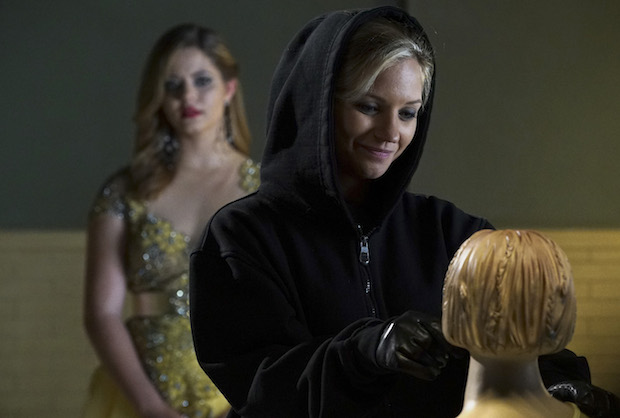 renamed “Charlotte” and paid Wilden off to have Toby’s mom’s death ruled a suicide.

* Mrs. DiLaurentis didn’t know Charlotte was CeCe until the day they left for Cape May. (You know, when Jason asked if he could bring his girlfriend on the family trip. Awkward!)

* Charles/Charlotte/CeCe hit Alison that night, thinking she was Bethany, who was going to hurt Mrs. D.

* Mona hit Bethany with the shovel, thinking she was Alison. (Way to go!)

* CeCe befriended Mona in Radley because Mona thought she was Alison.

* Sara was the other Red Coat.

* Sara was also the Black Widow; she killed Wilden (and, presumably, Maya).

* CeCe left the country when the girls thought they killed “A” (aka Shana) in New York. She thought she could leave everything behind because the game was over. But it wasn’t!

* But wait, who killed Mrs. D? That, my friends, remains a mystery (likely to be revealed in Season 15).

As for the five-year time jump we’ve all been waiting for, it finally came at the end of the episode, though it didn’t reveal too much. All we know is that Alison’s last name is now Rollins and that “he” is coming after her.

Tell us, Pretty Little Liars fans, were you blown away by the CeCe-as-Charles reveal — or did you kind of see it coming? Drop a comment with your take on the summer finale’s (many!) twists below.