The Schmidt is about to hit the fan.

“He plays an addict who checks into the hotel and tangles with Sarah Paulson,” Murphy elaborated. “I 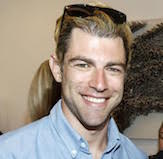 said [to him], ‘I have a feeling that you can and want to do something really f—ked up.’ And he said, ‘How did you know?’ So he cut off his beautiful hair and dyed it. And I think he’s lost 30 pounds. Yesterday, I talked to him and his waist I think is down to a 27. So he’s really commited to it.”

Murphy also noted that “the most disturbing scene we’ve ever done, he’s at the center of,” adding, “He really pushed himself as an actor. I was proud of him.”