Louie Season 6 will head into production… someday, whenever Louis C.K. is ready.

Holding court Friday morning at the Television Critics Association press tour in Beverly Hills, FX Networks CEO John Landgraf announced that Louie, which to date has produced 61 episodes — starring and written/directed/edited by its star — is on an “extended hiatus.”

“Louis is anxious to take a break from the show and work on other things,” including a feature film and the upcoming FX comedies Baskets and Better Things, Landgraf explained. As for a ballparked return date, the exec said, “I truly don’t know,” saying that auteur Larry David’s off-and-on Curb Your Enthusiasm is perhaps “the right analogy” to make.

Other topics tackled by Landgraf during the FX executive panel:

* Tyrant is “really finding its voice” in Season 2 after an admittedly “rocky” start last year, Landgraf said, urging critics to give the show a second chance.

* The 10-episode American Crime Story: The People v. O.J. Simpson, starring Cuba Gooding Jr., John Travolta, David Schwimmer and Sarah Paulson, promises to be “a massive television event” when it debuts in the first part of 2016. Landgraf touted the project as “fantastically entertaining and a remarkably insightful commentary on the issues of race in America.”

* Having seen all 10 episodes of Fargo Season 2, Landgraf is “confident [the drama] will again captivate audiences,” serving up a prequel to the first season’s twisty narrative.

* Having disseminated the chart below to the press, Landgraf opened the session with a lengthy, compelling oration on the state of television today — namely, how the proliferation of content providers, while a boon for diversity and variety in offerings, is slimming audiences to a cost-ineffective degree that is creating a “bubble” at risk of not bursting, but deflation. With the industry on track to crack 400 scripted programs, “You’re about to see a culling of the herd, a bit of consolidation,” he ventured, though well shy of any “return to the ‘bad old days,’ when there was a startling lack of diversity.” 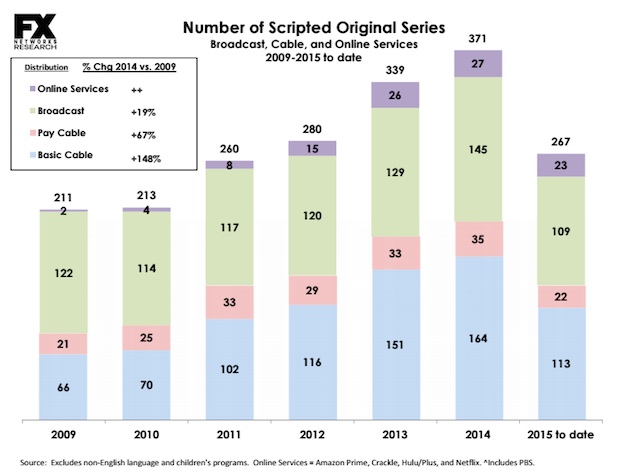