If Season 3 of Mistresses were a novel, this would be the point in the tale where I’d pour one last ill-advised glass of sauv blanc and then frantically scan the final chapter — BECAUSE I AM NOT TRYING TO DEAL WITH THIS MUCH STRESS RIGHT NOW, OK?

Somebody tell me Karen is secret pen-pals with Jessica Fletcher — not unrealistic! — or better yet, that April’s old college pal is Annalise Keating, and we’re getting a surprise crossover episode next week with fellow ABC drama How to Get Away With Murder. (Actually, speaking of the network’s Thursday-night lineup, we could use Olivia Pope’s team too — because nothing gets you to the truth faster than pulling out an uncooperative witness’s teeth without so much as a dollop of Novocaine.)

Obviously, my panic means we’ve come to the inevitable point in the “Luca Murdered!” story arc where Joss is weeping in the back of a cop car, and then there’s a dramatic pan shot where piles of bloody circumstantial evidence glow like a CSI-style, luminol-sprayed crime scene to spell out the words G-U-I-L-T-Y.

Except — DUH — girlfriend is completely innocent of this particular crime. (First-degree naiveté? OK, throw the book at Joss. But not homicide.) And as much as I understand a public figure like Calista having a momentary urge to avoid the awful public-relations fallout of admitting she and her erstwhile BFF were in cahoots to catch her sleazy hubby in a cheating scandal — on the exact night somebody shot him on the staircase of their Beverly Hills mansion — I cannot forgive her for withholding the truth at the expense of Joss’ freedom. 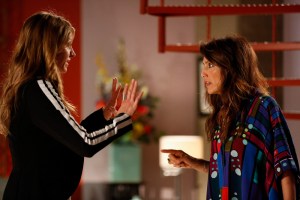 Even worse, Calista’s righteous indignation that Joss would throw some suspicion her way — when it’s Calista who’s given her no other options —makes me wish Karen had tossed her glass of chardonnay in the fashion designer’s smug mug rather than (spoiler alert) pouring it down the drain! (Girl, listen to your priest: God is responsible for Xanax — and Kendall Jackson, too — thou shalt not take his vintage in vain!)

Anyhow, speaking of the need for veen, since I’ve got a Republican Presidential Debate to cover tonight, I’m gonna keep my rundown of the action supes pithy, K? (Don’t “tsk,” I hate myself for the end of that previous sentence more than you ever could.) 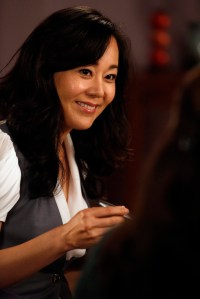 KAREN | Her three-way romance with Alec and Vivian may be kaput — but there could be a fourth party about to complicate things: A baby! Yep, Karen tells her doctor that she kinda sorta missed/doubled-up a few doses of her birth control, which might explain her cramps and sweats and possible anxiety attacks. Let’s hope it’s a false alarm, though. As much as I want Karen to find her bliss — and let’s be honest, (Alanis reference in 5, 4, 3, 2…) I’m sure she’d make a really excellent mother — a wee one would make her bar hookups and storage-closet nookie and wigs and church hats a little less pleasure and a lot more guilty in Season 4, no?

APRIL | Blair and April finally consummate their relationship — but alas, his technique puts the “ick” in “wahh chicka wahh.” I know, I know, hard to believe given his ab situation, but it’s true: The best adjective April can muster up is “fine.” (Ouch!) April tells her pals she’s drawn to Blair’s stability, but even Lucy — clearly remembering the Uncomfortable Syrup Scolding of July 2015 — can’t get on board, telling her mom she simply doesn’t like the guy. April’s not a good enough liar to convince herself that the safe choice is, in this case, the right choice, but she puts on a brave face for movie night and cuddles with the guy with the perfect hair and the zero percent body fat anyway. Let’s just hope they weren’t giggling watching Sleeping With the Enemy or Enough, yes?

MARC AND HARRY | When Marc shows up drunk for work, Harry almost fires him — until his new favorite bro crashes on his couch unannounced and admits he’s a recovering alcoholic. Harry — horrified that he was the one who handed Marc his first drink in three years — insists on helping the sweet bartender (first step: giving him a back-of-house job at Wunderbar) and the hour ends with Marc tentatively walking toward an AA meeting. C’mon Mistresses writers, we need some good news: Make sure our guy strides through that door and recommits to his sobriety immédiatement! It’s the only possible option if he’s going to ever let April get a chance to find out if he’s better than “fine,” if you catch my drift. 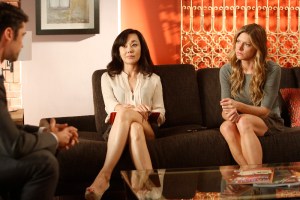 THE INCREDIBLY STRESSFUL ADVENTURES OF TWO CHICKS SUSPECTED OF MURDER | Karen and Joss hire a hot young lawyer — not sure if he’s “hot” in the “wins cases” way, but he’s easy on the eyes — but Joss messes up when she says she’s never been in Calista’s basement (and the cops find her prints on the doorknob). Joss tries to get an edge on Calista by investigating her past — and learning her first husband (back when her name was Carla) killed himself under suspicious circumstances.

When Calista learns Joss isn’t standing idly by while she lies about their actions the night of the murder, she decides to back up the bus that she’s already thrown Joss under. She tells the steely detective in charge of the case that Joss was trying to Single White Female her — and even threatened to kill Luca on her behalf. It’s certainly not enough for a real life indictment, but this is a soap opera, and this particular chapter ends with Joss being read her Miranda rights and weeping in abject terror. Before we stress too much, though, let’s remember Lanky and Lovely has Mama Bear Karen in her corner. Can we recount her end-of-argument threat to Calista to steel ourselves ’til next Thurs?

Calista: Hey, you cane to my house!
Karen: Don’t make me do it again. (Yes, the “comma” and “bitch” at the end of the sentence were implied!)

On that note, I turn it over to you. What did you think of this week’s Mistresses? Is Calista redeemable in any way? And where do you stand on a Karen pregnancy: Yea or nay? Share your thoughts in the comments!