In the final scene of the episode, Ben interrupted Bonnie and Brad’s wedding ceremony, paving the way for an epic proposal… from Danny!

“We needed to let these kids start settling down and growing up and making big decisions,” creator Dan Berendsen tells TVLine of the huge moment, adding that the Danny-Riley pairing had always been part of his master plan for the series. “It was a very calculated move.”

Read on for more scoop from Berendsen, including what the future holds for Riley and Danny, how their relationship will change Ben’s life and whether or not Bonnie and Brad will ever tie the knot.

TVLINE | I feel like Danny skipped a few steps by proposing. Was there any debate about whether that was too much too soon?
I think we felt we earned it, considering who Danny is. There will be ramifications from that, but I don’t think we went too far. It’s what the character Danny would do at that moment. Our writers’ room has its fair share of Ben supporters, so there’s been debate since Day 1.

TVLINE | Do you know what her answer will be?
Yes. We know where Danny and Riley’s relationship will go in Season 5 for at least the next 20 episodes. 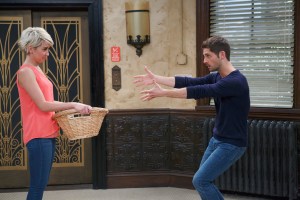 TVLINE | Will there be a time jump, or will Season 5 pick up right where we left off?
A little bit of both. In the first episode, you’ll see the aftermath of the proposal, and then we’ll be jumping ahead a month. … We wanted to show Danny and Riley mid-relationship, rather than doing the same stories we’ve done with Ben and Riley, like their awkward first date. We wanted to go to some fresh territory.

TVLINE | When last we spoke, you said this season would put an end to the love triangle. Can we officially put it to bed?
I think you can officially put it to bed, yes. We’re going to deal with the Ben aspect of it; 504 or 505 will focus on what it feels like to have lost her. But this is the relationship that was meant to be, and now we can let Ben grow up and figure out what he really wants to do.

TVLINE | Did you always know it’d be Danny?
I’ll admit, there were moments when we’d be doing a scene in the heart of Ben and Riley that we thought, “Oh my God, they should be together.” I wavered the most on the train episode, which is one of my favorites. I went back into the writer’s room and was like, “OK, we might have to rethink this…”

TVLINE | I was surprised that Ben initiated the proposal. Is this a sign he’s growing up?
We needed the audience to know that Ben’s going to be OK with this. My favorite aspect of the show is the bond between the brothers, no matter how much they fight. The one piece of the puzzle Ben never know, which didn’t resolve until [the Vegas episode], is that Danny had been in love with Riley his entire life. He’d never had that piece of information.

TVLINE | And where does this leave Bonnie and Brad?
Bonnie and Brad still haven’t gotten married when we return for Season 5, but they’re very much trying to. It’s not going to be easy for those two.

Baby Daddy fans, did the right brother propose to Riley? Grade the finale below, then drop a comment with your thoughts on the epic cliffhanger.