The struggle is real, especially for unfeasibly hot — but not especially tall — folks who’ve been held back from lessons in tooching, booching, smizing and acting the damn fool on national television all because of their height.

No need to break into a rousing chorus of “We Shall Overcome,” however, as Cycle 22 of America’s Next Top Model is now an equal-opportunity humiliator. Short or tall, hearing-impaired or personality-impaired, everyone has a chance to throw him- or herself into a giant foam pit and root around for balls emblazoned with their own names, balls that tell them “You’re one of the 22 human tragedies deemed pretty/emotionally malleable enough to move into the Top Model house!”

But don’t cry for the nine folks who couldn’t find their balls (so to speak). “I’m not conceited,” declared one chick whose name I didn’t bother to write down, before grousing that there must have been some kind of mistake, given her striking visage and vertical reach. She’ll be paid handsomely when her tears get collected and shipped to the plant where they make Tyra’s signature fragrance. 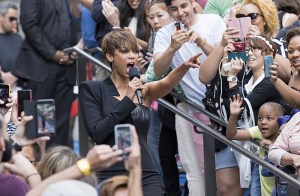 Wait — who were we talking about? I’ve already forgotten! With that said, let’s dish the five most intriguing hopefuls from a Top Model season — no, cycle — already brimming with breast implants, Zappos product placement, heartbreaking backstories and busted dollar-store crowns. (I’d like to include Tyra’s pantsuit with the scorched-off shoulder in this countdown, but alas, it has already been sent to the Smithsonian.)

5. Justin and Mickey (tied): Crazy-gorgeous Asian guy even impressed the irascible Kelly Cutrone, while the latter, a peculiar hippie dude who broke his family’s pattern of doing jail time and dropping out of high school, might be more interesting than his first impression indicated.

3. Miguel: Openly gay, ex-military guy got very little screen time — but may be the most handsome man to make his TV debut in 2015. #swoon (Sorry, dude who won The Bachelorette!)

2. Ashley: Winner of Week 1’s most striking photo — at least as far as I’m concerned — also has a harrowing backstory of overcoming childhood sexual abuse and several years of living in a homeless shelter.

Your turn. What did you think of the Cycle 22 premiere? Which contestants made the strongest first impression? Grade the hour in the poll below, then hit the comments with your thoughts!