Of all the twisted things Charles has done over the past six seasons of Pretty Little Liars, asking his sister to prom might just be the most unsettling.

Ali was all set to join the girls at their make-shift prom in Spencer’s barn until a last-minute text from her brother sent her dashing like Cinderella towards Rosewood High. Spencer, of course, was the first one to track her down, but after an impassioned speech (“I’m not leaving until I can look him the eye and ask him what I ever did to make him hate me so much”), she decided to let Ali do her thing.

Things got pretty dicey when the girls caught Clark running after Alison with a gun, but once he explained he’s actually an undercover cop — yeah, that happened — it was business as usual. (Speaking of Clark’s big reveal, I loved how shady Emily was with Aria: “You really had no idea?” Damn, girl.) Maybe if they’d Clark do his job, rather than pestering him with nonsense, he might have caught Ali before Charles kidnapped her.

(Also, did anyone else get goosebumps when Alison saw Charles’ face at the very end? I’m starting to think he is someone we’ve seen before.) 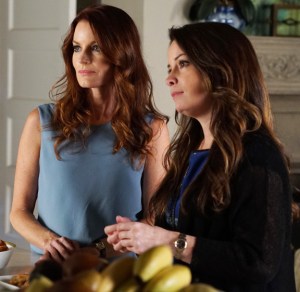 #PLLMOMS | For the record, I would gladly watch an entire episode solely focused on the Liars’ moms; not only was their gossip sesh the absolute best — drink up, Veronica! — but they’ve mastered the art of turning suddenly and looking surprised. (I guess now we know where the girls get that from.) Plus, watching them work together to solve each mystery, including what the hell Reese from the Carissimi group was doing in the DiLaurentis’ house, was a lot of fun. When it comes to the moms, I really only have one question: Are they ever going to get out of that basement?!

MANHATTAN LOVE STORY | Following his shady trip to New York, Caleb returned just in time — and in a killer suit — for one last dance with Hanna, which came equipped with some exciting news: He landed a job in the city, working as an [insert confusing computer-y job title here] for a major company. He promised he’d be making enough money for Hanna’s tuition and an apartment they could share. (Now, this is the Caleb-centric spinoff we’ve always wanted!)

PICTURE IMPERFECT | Still riding high from her photography contest win, it seemed like Aria was going to make it a perfect night with a full-on Ezria reunion. Instead, Aria and Ezra decided to go their separate ways for good — her to Los Angeles for the internship, him to Thailand for some work with Habitat for Humanity. (Relax, people. They’ll get back together someday.) As for Rosewood’s remaining couples, Sara and Emily ended up going to the dance together, and Spencer and Toby appear to be doing OK… even though she accidentally drugged him and got him suspended from the police force. Oops?

OK, time to nail down our final theories before next week’s info-dump of a reveal: Do you agree that Charles is someone we know? Did you love watching the moms as much as I did? And, seriously,. who organized that insanely lavish prom? Drop a comment with your best guesses below.