Before I begin this week’s Teen Wolf recap, I’d like to take a moment to reflect on the beloved character we lost during Monday’s hectic episode.

Roscoe the Jeep, you will remain forever in the well-ventilated parking garage of our hearts.

Moving on… I think I’m going to start referring to Scott as “Coach” from now on, because his life is just one difficult call after another. This week, it was: Do I use Hayden as bait to trap a Dread Doctor, or do I throw Liam a bone and spare his girlfriend’s life? Naturally, because executive producer Jeff Davis told TVLine that Scott is going through a bad-decisions phase, he chose to use Hayden as his glorified worm — losing both her and Liam to the Dread Doctors in the process. Smooth move.

Not to mention, turning the school into a fortress to trap the Dread Doctors led to some crazy visions for the entire pack: Scott thought Kira — excuse me, the Messenger of Death — was skewering him like fondoo, Lydia got her tongue “ripped out” by Tracy, and Malia… I don’t know, she was stuck doing something unfortunate on the floor. (You can’t expect me to process everything.) 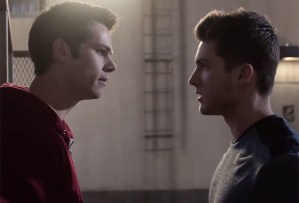 R.I.P., ROSCOE | And where were Theo and Stiles while all of this was going down? Why, they were on just about the cutest stake-out date I’ve ever seen. Stiles told him he wanted to spend “quality time” with him, then Theo reciprocated with a story about how he’s always going to be there for him. It was all very romantic — that is, until Theo started back up with his break-up-Stiles-and-Scott routine. According to Theo, Scott should be OK with Stiles killing Donovan because it was in self-defense; he also flashed Stiles his glorious golden eyes to prove he didn’t lose his innocence, but I feel like that was just an excuse for more flirting.

Their big date went up in smoke — so to speak, but also literally — when Theo politely excused himself from within Roscoe mere seconds before an explosion blew the poor Jeep  pretty high. Naturally, Theo took the chance to play hero while Parrish escaped the morgue with yet another corpse, but I really hope Stiles doesn’t take the whole experience at face value. (Do some sleuthin’, boy! Theo’s no good!)

THE HOT (CAR)SEAT | Speaking of Parrish I think we need to — at least briefly — discuss his truly effed-up sex dream about Lydia.(That was a dream, right?) I mean, I admit I was pretty down with it until she became a full-on burn victim after a bit of particularly heavy petting. Every so often, even those of us who claim to understand Teen Wolf need to throw up our hands and admit something went completely over our heads. For me, it was Parrish’s dream. (I welcome any and all explanations in the comments section below.)

WHAT THE FOX? | I’ve always supported the you-do-you movement, so after this week’s episode — in which Kira nearly killed her mother during an impromptu sword fight/life lesson — I’m really glad our li’l kitsune is taking some time to work out her issues. (As she told Scott, “I think I need to figure out what’s going on with me before I try to help anybody else.”)

Your thoughts on this week’s explosive hour? Do you think Hayden will survive the season? And, seriously, what was that Lydia-Parrish scene?! Drop a comment below.