Prepare for an UnREAL season ender that you won’t soon forget.

“All I can say about the finale (airing Monday at 10/9c on Lifetime) is that Rachel gets what she deserves,” creator Sarah Gertrude Shapiro teases.

That’s not entirely true; that’s not all she can discuss. Below, Shapiro also weighs in on Rachel’s feelings about Adam’s big proposal and comes to Team Jeremy’s defense.

But before we get to the romance of it all and explore Season 2 ideas with executive producer Marti Noxon, there’s an Everlasting finale to produce, as well.

AN OFFER YOU CAN’T REFUSE…RIGHT? | You better believe Rachel is seriously thinking about running away with Adam after last week’s cliffhanger. “Oh, my God, she’s completely considering it!” Shapiro confirms. “Who wouldn’t consider that offer? It’s incredible.” Given that Rachel will indeed deliver a spectacular Everlasting finale and thus won’t be jetting off — at least, not yet — it’s safe to say that some 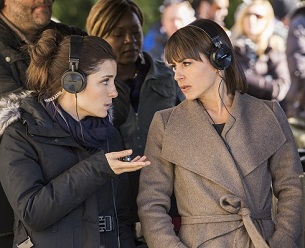 obstacles are ahead. “There’s a lot in the way between her and Adam. Quinn plays into it a bit,” Shapiro teases. Shiri Appleby sees Rachel as the biggest challenge to that potential romance because she is “super messed up,” the actress explains, to which Constance Zimmer responds, “And I’m trying to help her not mess herself up. So that would make me your biggest challenge beside yourself.”

THE GOOD GUY? | How would Jeremy react if he learned the truth about Rachel’s complicated relationship with the reality show’s suitor? “He’d be heartbroken,” Josh Kelly replies. “Really, really heartbroken. He doesn’t think of Adam as a multidimensional person.” Fans, however, have certainly warmed to the Brit — something on which Kelly can put a positive spin. “There comes a time in your life where you have to realize that the hot guy from Pitch Perfect and Harry Potter is hotter than you,” he jokes. “It’s OK. I’m just happy that some people are Team Jeremy.”

Despite the fact that Rachel’s ex cheated on his fiancée Lizzie, Gertrude thinks the camera operator “actually is a good guy” who’s just gotten caught up in a dangerous world. “One of the things we talked about is that ‘the path to Hell is paved with good intentions,'” she explains. “Rachel suffers from that a little, Jeremy suffers from that a lot. In these kind of environments that are very cutthroat, the people that are trying to be good sometimes do more harm.” 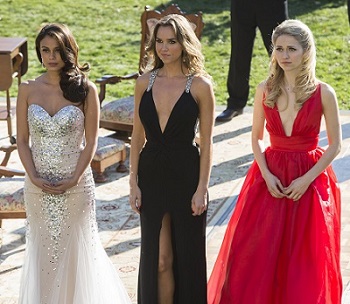 THE BITCH RETURNS | “Britney is back with a vengeance!” her portrayer Arielle Kebbel exclaims. “Here’s the good news: she knows they need her to be back, so now she’s got the upper hand. There’s going to be a little cat-and-mouse going on between [Rachel] and Britney. Listen, Britney’s back to win, but she’s also back to have some fun.”

QUINN ON TOP | Thanks to a little birdie, Chet now knows that Quinn is attempting to take him down — “but I’m not worried,” Zimmer says with a smile. “I’m pretty sure I win.” (We’d expect nothing less. #Quinning)

EVERLASTING: SEASON 2 | Regardless of what happens at the close of Monday’s finale, a world of possibilities exists for the show-within-the-show. “We’ve been playing around with a bunch of ideas,” Noxon says. “I’m kind of attracted to doing the flip and having a bunch of guys in the house, because I just think it would be such a different dynamic and [we would] be able to comment on how different men and women are in that situation. Sarah [Gertrude Shapiro], who worked on The Bachelor, told me that it was so much harder to get good drama out of the dudes because they’d just be like, ‘We’re bro-ing.’ ‘We’re hanging in the hot tub.’ ‘I really respect that guy.’ They turn into, like, a football team,” the EP explains with a laugh, adding that a tropical location has been bandied about, too.

And make no mistake, everyone wants in on the Season 2 fun, including Breeda Wool, who thinks thus-far-closeted “Faith should totally be the next suitor” with “all lady contestants” competing for her heart. And hey, it could happen – sort of! “We’ve talked about a reality show like Raising Faith or Keeping Faith, the whole Faith-coming-out show,” Noxon reveals. “But that might be a sidebar, a spinoff.”