Yvonne Strahovski has played the killer before, but she’ll soon be on the other side of a murder investigation.

The Dexter alumna has been cast in Amazon’s drama pilot Edge, opposite Max Martini (The Unit) and Ryan Kwanten (True Blood).

Based on the books by George G. Gilman, the potential series centers on Martini’s Josiah Hedges (aka Edge), who is out for vengeance after his younger brother is killed. Per our sister site Variety, Strahovski will play Beth, a mysterious Pinkerton detective and newcomer to the town of Seward, Kan., where the series is set.

* Arrow has cast Ryan Robbins (Falling Skies) in the recurring role of Conklin, a sadistic, ruthless member of Shadowspire who will be an adversary for Oliver in flashback sequences, Variety reports.

* Edi Gathegi (Proof, Justified) will recur on The Blacklist Season 3 as Mr. Solomon, a foe for Liz who handles the Cabal’s dirty work, EW.com reports.

* General Hospital actress Rebecca Budig will soon be back on the series, per Soap Opera Digest, as her Hayden Barnes will come out of the coma she has been in since getting shot in the head in May.

* AMC has released the first photo from Better Call Saul‘s second season (embedded below), in which Bob Odenkirk’s Jimmy McGill looks more distressed than ever: 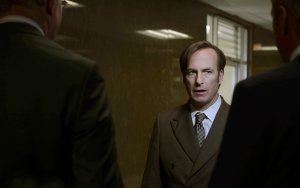