Welcome to the Week of Constance Zimmer.

Already over the past few days, the actress has wielded wicked moves on Lifetime’s UnREAL and played around on NBC’s Hollywood Game Night. On top of that, she returns to USA Network’s Complications tonight (at 9/8c) to check in on Dr. John Ellison (played by Jason O’Mara), who since his previous shrink session has gotten even deeper with his dark dilemma.

“I don’t know what’s happening,” Zimmer marvels of her sudden omnipresence. “I feel like I’m on television far too much this week!”

TVLine invited the busy Entourage alum to previous both her Complications encore and what is sure to be an UnREAL season finale.

TVLINE | What brings John back to Dr. Laster this week? I assume it’s not a social call.
I think he’s kind of losing it. [Laughs] To be perfectly honest, it was all about timing, too, as far as where they are in the story arc of the show.

TVLINE | They had to throw a bunch of of new stuff at him.
Yeah, and he’s got to kind of “come back” to reality, as they say. He’s gotten completely lost in all of the drama, as you’ve seen on the show. It is so much fun when I pop in because it’s almost like a retelling of what’s been going on, like, “This is everything you’ve done. Let’s 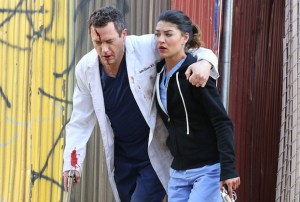 now decide where we go from here.” It’s a great place for Dr. Laster to come back.

TVLINE | Is it a more complacent John versus their previous session?
Yes and no. He’s still pretty aggressive with me. He’s still pretty combative, and thinks that whats he’s doing is not necessarily wrong, and that’s what makes our relationship so great. I keep trying to get him to realize that everything’s gotten insane and it’s not going to get any better, and he’s constantly trying to tell me, “No, I’m going to be fine. I’ve got it under control.”

TVLINE | As Dr. Laster reviews the laundry list of all the bats–t crazy stuff that’s been going on, what does does John possibly argue?
He’s in his own sanity, I think, which is how he got into the trouble he got into in the first place. He’s making it all so believable, that everything he’s doing is for the greater good. So it’s all about trying to convince me that it’s all going to be fine. Yes, there are parts of him that are starting to crack, but he’s not going to allow that to seep through.

TVLINE | What do you think her honest take on him is? Does she think he’s a good doctor?
Hmm, that a very good question…. I think she believes that he is very good at what he does but the personal involvement makes him not be as good as he should be. She wouldn’t be trying so hard if she didn’t think he was worth fighting for.

TVLINE | Are we going to see you again, or is this is for now?
This is it for this season (which ends Aug. 13). Due to scheduling conflicts, I couldn’t get there more even though I would have loved to. 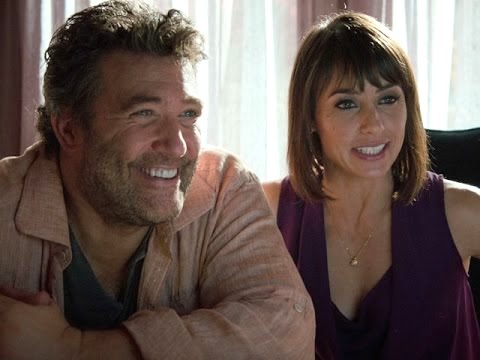 your busy schedule and turning to UnREAL: What do you think it was about Chet’s latest behavior that pushed Quinn to the point of no return?
It was the straw that broke the camel’s back. You can only get played so many times until you finally realize you’re being played. It was the final, final straw. They’ve come full circle in the sense of the proposal and him cheating on her again.

TVLINE | And so soon! Maybe it was just the proximity to the proposal?
I think that even if it was a week later, it would have been the same. [Laughs] But proximity yes, because that office to my office is also very close! But also, we’ve got to get through things very quickly. We have 10 episodes to do it all in, so I’m sure you’ve noticed that we pack a lot into each episode.

TVLINE | Uh, yeah.
[Laughs] So for me, I actually appreciated that we cut to the chase. “Here it is, everything you thought you wanted! Oh, sorry, the reality is it’s not, so what are young to do about it?” For Quinn, that’s it, there is no more going back.

TVLINE | Does a part of Quinn 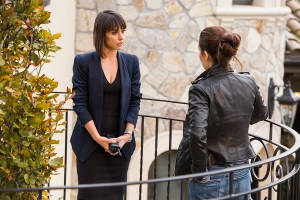 TVLINE | It’s “tough love”!
It is tough love! It’s very tough love. Obviously she does have a heart, so there is a part of her that knows shes putting Rachel in a corner, but she also put herself in that corner by sleeping with Adam. She did it to herself in a way. The way Quinn would look at it was as “a cry for help.”

TVLINE | Will Monday’s season finale make it clear what Season 2 of the show will look like and who will or won’t be a part of it?
Uhhhh…. Yes…. Yes, I believe so. There are definitely some open-ended issues. We have to keep those cliffhangers hanging, right?

TVLINE | But will we know, “OK, they’ll be working on such-and-such reality show in Season 2”?
No, I don’t know if you’ll get those specifics. But you’ll know that something is a-brewing and the direction that we’re going to try and take.