Another week in Rosewood, another former friend revealed to be a lying, scheming “A”ssistant.

The girls went into full panic mode on Tuesday’s Pretty Little Liars after the man of many colored hoods hijacked Aria’s exhibit, unveiling a collection of photographs taken from within Charles’ bunker. (And Kudos to Hurricane Ella for unleashing the beast on Tanner, whom she suspects isn’t doing nearly enough to keep the girls safe.)

Oh, and in case you need a refresher on those photos, go on, feast your eyes: 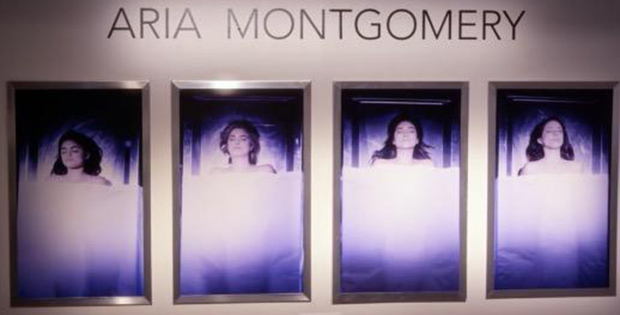 But wait, it gets so much worse: While tailing a potential suspect after the incident at the gallery, the girls — sans Aria, of course — noticed Clark following him right into the abandoned doll house (which, of course, every town has).

And how could I forget good ol’ Red Coat and Black Hood — or should I say Black Widow? The gruesome twosome were seen spying on Aria and her mom, and they looked awfully chummy. Seriously, is there any article of trustworthy clothing left?!

MR. CARISSIMI WILL SEE YOU NOW | Hanna and Spencer’s investigation into the Carissimi Group led them to a meeting with a man named Reese who happens to look exactly like Jason. Naturally, they jumped to the most obvious conclusion — Reese is Charles! — without entertaining any other possibilities, such as: this is just another handsome man who lives in our town. (Get it together, girls. Rosewood is crawling with handsomes!) Then again, catching Reese at Aria’s exhibit and in the abandoned dollhouse gave the girls plenty of reason to suspect him.

OH, BROTHER | Alison did some investigating of her own this week, lulling Lorenzo to sleep with soup in order to steal his key and gain access to the evidence locker. He was understandably peeved to wake up and discover he’d been tricked, though not as angry as Tanner; after a lengthy chat about a baby rattle they found in Charles’ bunker, Tanner informed Ali that — if need be — the police would attack him with “lethal” fire. Not to be insensitive here, but I think I have to side with Hanna on this one. Alison met Charles one time, and he’s been making her life a living hell ever since, so why is she so determined to keep him safe?

FLIRTY WORK | While this week’s episode was mostly about nude reveals and sketchy Fifty Shade-types, our girls still managed to find time for romance, or at least the possibility of romance. Not only did Emily tell Aria all about her kiss with Sara, and that she wants to take her to prom, but Aria also made serious progress with Ezra. You can’t tell me you didn’t feel the romantic tension between the exes during their post-gallery chat; all that talk of Iceland and blankets just made Ezra want to spy on her — I mean, kiss her — all over again. (Sorry, old habits!) If Nicole hadn’t shown up to ruin Aria’s prom-posal, we might have even gotten a long-overdue Ezra kiss.

OK, let’s hear your thoughts on this week’s episode: Is Clark really bad, or just another red herring? Are Red Coat and “A” working together? Drop a comment with your theories below.