Forget chimeras, Dread Doctors and feather-puking wallflowers. On Monday’s Teen Wolf, Scott and his pack faced their greatest threat thus far: attempting to read an entire book… with no pictures!

It was all in the name of jogging their memories, discovering whatever it was the Dread Doctors wanted them to suppress, but boy did it make them sleepy.

The award for Most Heartbreaking Memory goes to Stiles, who recalled the night his mother attacked him because she believed he was trying to kill her. (Gee, I can’t imagine why a 10-year-old boy would want to suppress that.) In fact, Stiles was so rattled by this recollection that he was nearly murked by a chimera. Fortunately — and I use that term loosely — Theo arrived just in time to save the day. And to blackmail Stiles into keeping quiet or else he’d tell everyone what really happened to Donovan.

PUFF, PUFF, PASS (OUT) | Scott’s memory, a dog attack he apparently suffered as a tyke, was triggered during a particularly unfortunate meeting with his AP Biology teacher — not that one could have a fortunate meeting with that science Nazi — which brought on a nasty asthma attack. I was pretty worried about Scott until Liam showed up, inhaler in hand, just in the nick of time. (Full disclosure, though: I half expected Liam to blow directly into Scott’s mouth. I figured he might have learned a thing or two since he’s been spending literally all of his free time at Sinema. Next week, maybe.) 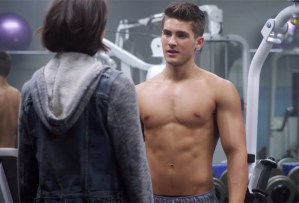 DO YOU EVEN LIFT, THEO? | After weeks of hype, Teen Wolf finally made good on its promise of a gratuitous Liam workout scene, and while he’s no Derek Hale — seriously, never forget where it all began — the newbie definitely held his own in that weight room. He also held his own against Malia, whose arrival turned it into a workout… for the mind. She threw a whole mess of questions his way, mostly about why he didn’t tell Scott that Malia remembered the Desert Wolf attack, all of which he fielded without ever dropping a weight. (Side note: I feel like Malia has spent all of her screen time with Theo as of late. She does remember Stiles is her boyfriend, right?)

PSYCHOBABBLE | Speaking of Theo doing inappropriate things to other guys’ girlfriends, the wannabe pack member apparently snuck upstairs and recorded Kira sleeping. And while his shady shenanigans turned out to be helpful — any guesses why she’s been muttering “I am the messenger of Death” in Japanese? — that doesn’t make his methods any less suspect. (For the record, if he’d done it shirtless, I’d be considerably less judgmental. Figured I should mention that.)

BITCH BETTER HAVE MY MONEY | Liam continued his relentless pursuit of Hayden this week, first at Sinema — where we learned that she’s working hard so her sister doesn’t have to pay for a kidney transplant she had a few years back — and then on the lacrosse/soccer field. That’s where we got the scoop on the couple’s rocky past; in middle school, Hayden apparently got caught in the middle of one of Liam’s hallway scuffles and ended up with a black eye. (Picture day = ruined.) Oh, we also learned that Hayden’s a chimera, but I feel like that’s way less tragic than Liam ruining her picture day. No retakes, bruh!

LET’S GET PHYSICAL | For the record, I didn’t purposely save Lydia for last this week; I’m just way too lazy to cut and paste this at the top. Anyway, her repressed memory found her back at Eichen House, where she watched her mother holding down her grandmother while she was getting her head drilled in a bathtub. Totally standard Lydia childhood fare. … The twist? Unless I misunderstood her, Lydia theorized that the memory was actually someone else’s.(Also, Lydia and Parrish flirted up a damn storm during their training session, so to all of you who judged me last season for ‘shipping them, please tweet me your sincerest apologies.)

Your take on this week’s bananas hour of television? Do you suspect, as I do, that Theo will use Malia, Stiles and everyone else’s secrets to drive a wedge between them and Scott, thus allowing him to slip into the role of pack leader? Drop a comment with your theories — no matter how wackadoodle — below.