Will there be blood when NCIS returns? How best to sum up the Once Upon a Time Season 5 premiere? Will Supernatural‘s Dean pay a price for snuffing Death? What’s the state of the Hawaii bromance? Read on for answers to those questions plus teases from other shows.

Have The Powers That Be at NCIS and NCIS: New Orleans clued you in on what their respective season premiere episodes are entitled? –Caitlin
No, but thanks for the reminder to ask! Airing Tuesday, Sept. 22, NCIS‘ season opener is titled (gulp) “Stop the Bleeding,” while NCIS: New Orleans will follow with “Sic Semper Tyrannis” – which, and I may be wrong, sounds like an awesome Jurassic World riff! What, no? (To complete the hat trick, I can tell you that NCIS: LA‘s Sept. 21 premiere is titled “Active Measures.”)

If possible, could you retrieve any teases for Season 7 of NCIS: LA? – Tony
Funny your name there, because I am hearing that NCIS fave Michael Weatherly’s crossover, currently penciled in for October, is quite hilarious. Said simply: DiNozzo + Deeks = LOLOLOLOL.

I require information on Once Upon a Time‘s Camelot crowd! –Meredith
This casting notice would seem to apply: For Season 5’s fourth episode, Once is guest-casting the role of a medieval manservant who is devoted to his employer but harbors a deep resentment… that may lead him to do very bad things.

If there’s anything you can tell me about Once Upon a Time, specifically on Emma being the new Dark One? –Sarah
The cast touched on that during our free-wheeling, at-times blush-worthy Comic-Con Q&A, but maybe there is a smidgen more to be gleaned by watching this “deleted scene,” in which everyone teases the Season 5 opener with two words:
https://www.youtube.com/watch?v=ZVz9VgUR3TA

Hi Matt, can you give us some spoilers on Hawaii Five-0‘s Steve/Danny? –Mary
I can’t get into specifics, but I have it on good authority that there are some very sweet and “bromantic” moments on tap for Season 6, especially in the first three episodes. Danny is very much going to have McGarrett’s back, I hear, maybe even being a bit protective of his partner in crimesolving.

Will NBC air the remaining episodes of About a Boy? -Michelle
I chased this one like a dog for you, Michelle, but alas, there currently are no broadcast airdates for About a Boy this summer — though “Matty” in Comments (no relation) claims they are available via iTunes and other space-age doohickeys.

I am loving ABC Family’s Stitchers! Do you have any scoop on Cameron? –Ashley
The “scoop on Cameron” is that in the Aug. 4 season finale he’ll find that being in a covert government agency can be dangerous, when he and Det. Fisher are targeted in a shooting. Meanwhile, “Camsten” fans will enjoy watching Kirsten find out that she has a previously unknown connection with Cameron…..

Do you have any scoops on Season 2 of TNT’s Legends? Will Ali Larter and Tina Majorino return? –Ivan
As revealed in my thorough and handy Ins & Outs photo gallery, neither Larter nor Majorino are returning alongside Sean Bean for Season 2, though Morris Chestnut is.

Do you know if 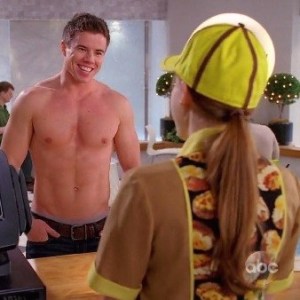 we’ll be seeing Sue’s Abercrombie & Fitch model friend again on The Middle? I thought they were pretty cute together. –Amy
I smell… no, not remnant body spray wafting out of the A&F store… but an encore on the horizon, since David Hull is set to reprise his role as oft bare-chested Logan.

Since the finale of Supernatural, fans have been wondering: Will there be consequences for Dean after he killed Death? –Ana
Rest assured there will be repercussions “to a certain extent — and probably in the first batch of episodes, we’ll start to address that,” executive producer Jeremy Carver teases. “You can imagine that it causes some issues.”

Any scoop on where our Supernatural boys will be in Season 11? Particularly Cas? —Meg
Cas has a lot on his plate, like “dealing with the effects of the attack dog spell and the stabbing of Crowley and The Darkness,” Misha Collins previews. Speaking of that pre-biblical foe, “It is a very, very big bad ominous force that angels only heard of as a scary bedtime story,” the actor explains. “Cas didn’t think that The Darkness was a real thing. So it’s that old of a force.”

Are Sam’s sister and father going to return this season on Rookie Blue? —Rosemary
We’ve got some good news and bad news for those hoping to see Sam’s family again. First, the bummer: “I don’t think we’ll see his sister,” executive producer Tassie Cameron reveals. “I know, it’s too bad. But we have so many characters to juggle and we felt like she served her dramatic purpose in the first couple of episodes last year. We loved [Robin Brûlé] and maybe they’ll bring her back if there’s a seventh season, because there’s a lot more we could do.” Now on the bright side, “We see Sam’s dad (Nicholas Campbell) again… but it’s more comic this time.”

Can you confirm if this is the plot to Castle‘s season premiere? –CBO
I can confirm that that could quite possibly not be more wrong.

Any scoop on my No. 1 show, Empire? –Kendra
For Episode 4 of the new season, the Fox hit is casting the role of Chloe, an aggressive reality show producer who firmly believes in getting good video by stirring up bad ish. Believing the Lyon home to be a veritable hornets’ nest, you can count on her to poke at the troubled fam with a sharp stick.

Do you have any spoilers 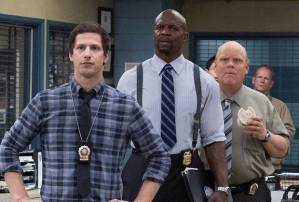 on Season 3 of Brooklyn Nine-Nine? –Allison
The Sept. 27 premiere will pick up exactly where the finale left off, with the squad facing the elevator doors waiting for the new captain to arrive. (Fun fact: Kyra Sedgwick will reprise her role as Madeline Wunch in the Season 3 opener.) Fans of the team’s former boss, meanwhile, needn’t worry – we will see Holt and Gina as they head to their new offices in Public Relations.

Is it too late to ask the Wayward Pines question I’ve been wondering about since, like, Episode 2? Why did the other bartender say that no woman worked at the bar when Ethan asked about Beverly? —B.
I brought your Q to showrunner Chad Hodge, and he assured, “Beverly really did work there.” Her colleague simply was keeping newcomer Ethan on his toes. “They were trying to mess with Ethan’s mind, to make him calm down and think he was the crazy one,” Hodge explains. “That’s one way of getting people to chill and follow the rules.”