Hannibal introduced a new brand of horror this week in the form of Francis Dolarhyde, a lonely film-processing technician overcome by the urge to slaughter entire families in their homes. But according to his portrayer Richard Armitage, he wasn’t initially convinced he was the right man for the role.

“The idea of taking on a character that does such appalling things has always been a worry for me,” Armitage explains. “I’m very conscious of what we depict on television, and it would’ve been a deal breaker had I been asked to actually commit those crimes on film, to portray those scenes in the graphic detail that Thomas Harris describes in his novels. Had that been the case, it would’ve been someone else playing this character.”

Ultimately, though, creator Bryan Fuller convinced Armitage that Hannibal‘s “Red Dragon” arc would be more about “the exploration of a man who looks like you or me, who has the potential for falling in love, but who has trodden a path which has led him to this awful state of anxiety, to this place where he is taking these families’ lives,” the actor continues. “I felt that that exploration was going to be interesting because ultimately, casting judgement on what people like Dolarhyde do is very easy, but to actually attempt to understand and empathize with someone that goes to that place is more difficult.”

TVLine caught up with Armitage to dish the most memorable moments of his initial Hannibal installment and to tease what viewers can expect from his arc over the coming weeks. 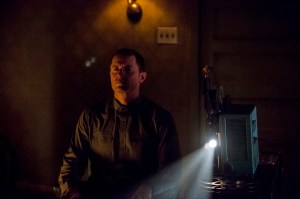 TVLINE | The first impression we get of Francis is someone who is completely tortured and conflicted. Even in the moment where he’s exiting the crime scene covered in blood, the horror in his own eyes is palpable. How did you come to play him in that way?
It was an organic process. We always had the novel to refer to, so everything that I found really came from Thomas Harris’ books, Bryan [Fuller] and my own interpretation. One of the things in my first episode that I found so interesting is that this man is so alone in the world, so isolated. There was a rejection in his childhood because of his disfigurement and because his character was orphaned; he was raised by his grandmother and abused by step-siblings.

But when we find him in this world, he works in a very isolated environment in the film-processing laboratory, and he lives alone. Thomas Harris describes him as having only set foot in two other people’s houses in his entire life — and certainly no one has ever come into his world. But for someone that is so alone, his mind is so busy and full of things. He has the subject matter of the films that he’s studying. He has voices in his head. He’s haunted by so many different things, like his mind is so far from silent, and that to me was something which was fascinating.

TVLINE | Your first episode is essentially wordless — which means much of what we learn about Dolarhyde is in the initial sequence of him doing physical exercises and contorting his body. There’s a sense he’s transforming into something else in that moment. Walk me through all that.
Yes, it’s really interesting the way it takes a long time before you hear Francis speak. He’s a man who is so uncomfortable in his skin, who is somehow at odds with his outer body and is almost outgrowing his physical form. So you see that conversation happening physically before you hear it verbally. And actually, for someone that has such trouble speaking and forming words, the first time we hear him speak is in Episode 9, and it’s a struggle. It’s really like baby steps when he speaks. And as an audience, we see him before we hear him, so we have a real sense of who he is or who he’s becoming and what it is that he’s pressing against or running away from.

TVLINE | What did you have to do to transform your own physique and your own way of moving your body to get in touch with the character?
Obviously, I read the book, and he’s described as a bodybuilder. So, before I got up to Toronto, I was in the gym doing intense workout sessions, since we needed to fill him out in the way that Harris wanted. But I also found something in the book where he’s described as moving in a very stylized way. Harris describes him as a Balinese dancer, so when he’s committing his crimes, I understood to be something of a performance for himself, that he’s trying to somehow be theatrical in his approach.

I couldn’t work out what that was, but then I stumbled on a Japanese form of a physical expression, an artistic art form called Butoh, which is sometimes called the Dance of Death. It’s a biological observation of the body in extremis, which I thought was perfect for this scenario. And so I used a lot of that. I also used some stress positions that I’d been working with previously on The Crucible, because I felt like the character was putting himself through something rather than changing himself for vanity sake. He’s wanting to torture his own body.

What you see in the opening exercise sequence, though, I put a metronome on in the room and just worked for 20 to 30 minutes, distorting my body and doing these exercises, and the crew just kept on filming. 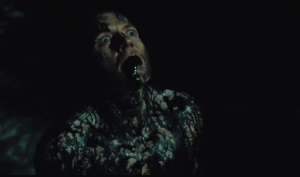 TVLINE | In this episode, we get to see Dolarhyde after his second murder, out in the snow, covered in blood splatter. And there’s also that twisted but sort of artful scene where your character gets wrapped up in a film reel and is in this intense state of panic. How much of those moments were actually filmed organically versus post-production manipulation?
The filming in the snow was actually one of my first shots in the entire series, and it was about 17 below outside, a very cold night shoot. Very little of that is post-production. They used a sugar blood that stains black and thankfully, they heated it beforehand.

The scene with the celluloid wrapped around Dolarhyde’s head is a combination of digital work and some practical stuff. They did create a fake head. And they also wrapped celluloid around my head and we filmed it again. It was a bit of an exploration of literally, physically getting tangled up in his world of celluloid. It’s Bryan’s imagination at work in the best way, you know.

TVLINE | Looking forward to the coming weeks, how freaky-scary should we expect this arc to get? And knowing Francis is about to embark on a romance of sorts with a character played by True Blood’s Rutina Wesley, how will that work? What can you tease?
You know what, we really do honor the book, and so you see the full extent of that tragic love story. To me, really, the crimes aside — and remember, I never actually had to portray any of the crimes, so I suppose I compartmentalized them — Dolarhyde and Reba represent a tragic, romantic love story, which really doesn’t end well and escalates into a Shakespearian opera of the proportions that Thomas Harris really explores in the novel.