Sharpen those chakrams, Xena fans, because the Warrior Princess is poised for a major comeback.

NBC and NBC Universal, along with original Xena executive producers Rob Tapert and Sam Raimi, are looking to revive the action-adventure icon, according to The Hollywood Reporter. The search is currently underway for a writer to pen a “modern reboot” of the series, which ran in syndication from 1995 to 2001.

Though original star Lucy Lawless has yet to attach herself to the project — which is still in the extremely early stages of development — producers reportedly want her involved both behind the scenes and in front of the camera. 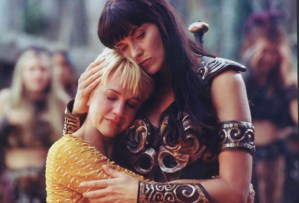 “I’ve been pitching [a two-hour movie], actually,” Lawless told reporters at San Diego Comic-Con earlier this month. “The fans really do want that, and I’ve met some people who’ve crowdfunded some things, and I’m just like, ‘Why don’t we just do that?’ … It’s still about who owns the rights to Xena. But it would still be cool to do it again with Renée [O’Connor], me, Ted [Raimi] and Bruce. It’d be a fun little gig, but what that is, I don’t really know.”

Along with this news comes a slew of important questions avid Xena fans will need answered: What role could Lawless have on camera, considering her character sacrificed her life in the series finale? Who would play the “new” warrior princess? And what exactly is a “modern reboot,” anyway?

Then again, it might not be worth getting your hopes up. Here’s what Lawless tweeted shortly after this news broke:

Sorry, friends! news of a #Xena reboot is just a rumor. I'd love it to happen one day but it's still in the wishful thinking stage.

For now, drop a comment with your immediate reaction to this news below.