THE PERFORMANCE | Throughout the acclaimed (and already renewed) freshman drama’s early weeks, Malek has impressed as Elliot Alderson, a cyber security whiz who finds himself tempted by the mission of an elite hacker group dubbed fsociety. But until this week, Elliot had always been coolly in control of his environs, be it handling the demands of his day job, navigating hookups and would-be romances or manipulating (in a well-meaning manner) his shrink’s life.

With the last line of morphine snorted up Elliot’s nose, however, Malek was sent down a wild rabbit hole, the actor’s performance making us glad to tag along for the ride. For the first beats of Elliot’s withdrawal, he managed fine enough, laying out for his fsociety brethren a plan to humanely sabotage the data facility dubbed Steel Mountain. Then… the brilliant mind began to melt down not unlike the mag tape he fried on a hot plate, allowing paranoia of passersby and worse to set in.

As Elliot went through his motel room detox — at the demand of his colleges on the eve of their ambitious attack plan — Malek employed the usual sweaty twitchiness associated with such a scenario. It was when Elliot started dissociating (further?) from reality, hallucinating the episode’s next several acts, that his portrayer took his work to a new level, daring us to not look away when the addict (seemingly) took a grim new plunge with his habit.

In the end, Elliot found his way back to reality, regaining lucidity in the motel room he in fact never left to score dangerous drugs. As Malek depicted that climb off the proverbial ledge, Elliot feared/lamented that he was forever alone. But then he realized that Mr. Robot, of course, was still with him — for better or for much worse.

HONORABLE MENTION | In the third season premiere of Masters of Sex, Caitlin FitzGerald — robbed this week of the Emmy nod that she so richly deserved — took Libby from hysterical (after Henry’s accident) to heartsick (over casualties of the Civil Rights Movement). But the scene that clinched the underrated actress this Honorable Mention was the one in which her fraying character crawled into Virginia’s bed, tacitly acknowledged the ongoing affair and then shocked her rival/co-parent — and, frankly, us — with a kiss. “I always wondered what it felt like with you,” she admitted. Bittersweet, subtle and sublimely sad. 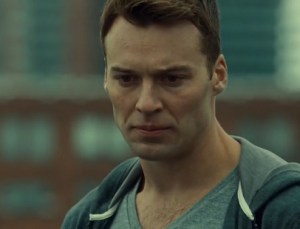 HONORABLE MENTION | Since his introduction three seasons ago, Rookie Blue‘s Nick Collins has been something of a mystery, but Thursday’s episode finally unmasked the officer’s tragic backstory in a standout hour for his portrayer Peter Mooney. Even though we never thought Nick would actually kill the man whom he believed was responsible for his parents’ death, Mooney’s performance was haunting and frightening, yet somehow understated, as he confronted his past. During an intense rooftop exchange, the actor showed us what he’s capable of, leaving us craving and praying for more Nick-centric installments. And the boy can longingly stare like nobody’s business.

Which performances knocked your socks off this week? Tell us in Comments!