UnREAL fans, we have some troubling news about bachelor Adam’s future on the Lifetime series (airing Mondays at 10/9c).

Given that the freshman season ends (Aug. 3) with one lucky lady claiming the Brit’s heart on the show-within-a-show Everlasting, we couldn’t help but wonder if Adam will even be a part of the recently announced Season 2.

“We don’t know. It’s unlikely,” his portrayer Freddie Stroma admitted to TVLine this week, noting the UnREAL producers still have to figure what they want do for the next edition of the dating competition series. “They could do a thing with a male suitor, they could do one with a female suitor, the dating reality show could go into something else…. They kind of can do absolutely anything they want.”

That said, “It’s unlikely that Adam will be back, because he’s already done a reality show,” the actor explains. “They’ll do a new show within the show.”

So will Adam’s story have a sense of conclusion at the end of this year’s run? “Um, yes,” Stroma hedges. “I can’t really give too much away. There’s a possibility of it ending on a high, or a low.”

But before you get too dismayed, Stroma offers up a bit of hope for Adam’s return in the Q&A below, as well as previews what last week’s spooning scene means for his future with Rachel.

TVLINE | We have to start with that unexpected moment of vulnerability and comfort at the end of the latest episode. What do Rachel and Adam want to give and take from each other in that scene?
There’s a sense of friendship, understanding each other – not on a sexual level. It’s just being there for someone. It’s something that they’ve done really well within the show, and I’ve really liked that dynamic between the two characters. We had that episode where she comes into the shower and they’re essentially both naked, but they haven’t done anything or looked at each other. It’s a fun bit of tension.

TVLINE | I feel like Adam “gets” her more than Jeremy does.
Yeah, I’d say so. Jeremy sees the way that Rachel behaves, and he has that history with her. But with Adam, he understands more her behavior and he doesn’t judge her because he, essentially, is the same. There’s comfort in that. 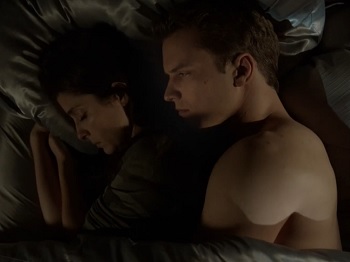 TVLINE | Does that moment at the end represent a turning point for them?
I think so. You constantly have these moments where Adam and Rachel are trying to play each other…. He really called her out on what happened with Mary (played by Ashley Scott), and once he realizes that she’s been doing whatever she could to help Mary and that she wasn’t necessarily involved directly with it — it was more the show and someone else that he didn’t know about — that’s where he realized he wanted to apologize and tell her that she’s not a monster, and let her know that it’s OK.

TVLINE | Does it complicate his feelings for her? Is he having trouble separating what’s real and what’s artifice thanks to the show?
Yeah. There’s so much manipulation involved in the show and he sees it. He knows that it’s being done to him, so he’s constantly guessing what it is she’s doing and what it is she wants. They’re both getting sucked into each other a little bit, and they’re still a bit guarded. They’re trying to figure out if something is a ploy for something. But they’re both starting to ever-so-slightly let their guards down.

TVLINE | Clearly, Adam’s attracted to Rachel. He enjoys flirting with her. But does he have genuine feelings for her?
One of the things that he likes about her is the fact that he’s never been talked to the way she talks to him. He comes from a very wealthy background and people speak to him in a certain way and he kind of gets what he wants. When he meets Rachel, straight away from the first episode, she doesn’t give him what he wants. There’s a game in that. He finds it really attractive, and I think [it’s] slowly starting to turn into feelings rather than just a fun game, if you will.

TVLINE | The show has such a cynical, dark take on relationships. Could Adam actually find real love on Everlasting, be it in front of the camera or behind the scenes? Or does the show’s tone and point of view make that unlikely?
I think it would be unlikely, but someone told me that these reality shows put a new perspective on it. They could get 20 people who could be eligible for marriage. A lot of people in this world might never actually meet 20 people who are in that eligibility. So there is a possibility to find love in these kind of shows. It’s just done the wrong way, in that it’s very manipulated and bizarre. It’s also, for me, highly unattractive for people to be fighting over a person.

TVLINE | Adam called Rachel out on her actions last week. Is this the beginning of his conscience coming out more? Or is he back to his old ways?
He’s a funny one because he is pretty naughty. What’s great about the show is it’s not so black-and-white. You don’t have good guys and bad guys. You’ve got some in between, and everyone has their moments. Adam has his down moments, but now you start to see him actually having a conscience. He sees what happened with Mary and that it’s not right. You see that he protected Faith, by embarrassing himself with his made-up sex tape. He protected Mary from her ex. So you see these sides of Adam that are actually quite good. And then of course, they love to show you lots of shades of gray.

TVLINE | Speaking of shades of gray: In that scene where you were having sex with the investor’s wife and Chet was watching, my eyes might have bugged out of my head a bit.
Yeah, it was a huge talking point when we were doing it because it was really pushing it. Luckily, Lifetime has been awesome, and they’ve told us we can go for what we want to go for. They’ve been so supportive. When I read that episode, sitting in my trailer, I just aloud was like, “Whaaat?!” I couldn’t believe it. I was like, “That is horrible!” I had to warn my friends and family about that episode.

TVLINE | Was there any nervousness on Lifetime’s part about that scene?
There was some nervousness because it’s pushing it a bit, and they have a pretty clean brand. It was definitely a step, but in the end, they were really cool with it. I think as soon as they saw the footage, they thought it looked great. It was what the episode needed, so they were happy to go forward with it.

TVLINE | I imagine shooting that was not the easiest thing in the world, either.
No. Luckily, it was fine. It was done very quickly and respectfully. We had a closed set, and all the actors involved were great. It could have been a lot worse.

TVLINE | Adam is a contestant within Everlasting, but he’s also a character within the show. So, could he be a character on UnREAL and not be a contestant on Everlasting?
There’s a possibility of that; it all depends on where they go with it. It’s the fun part of acting in this role because you get to kind of play two characters. You get to play Adam, who can be all sleazy and manipulative, but then you get to play Adam on Everlasting, where he’s acting all nice to everyone when he knows the cameras are on and he plays to it, which is really fun to play.