The Comeback‘s Lisa Kudrow declares that she’s getting ready to “work the room” at the 2015 Emmys.

Reminded that two of her fellow nominees for Outstanding Lead Actress in a Comedy Series (Grace and Frankie‘s Lily Tomlin and Veep‘s Julia Louis-Dreyfus) play her mother and her sister on Showtime’s Web Therapy, Kudrow adds that a third category-mate, Nurse Jackie‘s Edie Falco, appeared on the Kudrow-produced docu-series Who Do You Think You Are?

“I just need to work with Amy Poehler and Amy Schumer. I’ll be all hunched over their seats, ‘Hiii. How are you? Listen…,'” says Kudrow, chuckling heartily about the final two women in the 2015 race. “How annyoying would that be?”

Given the nine-year gap between The Comeback‘s first and second seasons, though, and the fact that it last aired in December, Kudrow notes that she’s “beyond gratified” with her nod. “I was not getting my hopes up,” she confesses. “I didn’t see the nomination announcements because I was up late [the night prior]. I thought, ‘My phone will wake me up,’ but it never did, and I wound up thinking, ‘Oh, that’s too bad.’ Then, all of the sudden, it started going off, and I thought ‘Yay!'”

Pleased as Kudrow is with the recognition, it doesn’t raise the likelihood of The Comeback returning for Season 3 — mainly because, “We’re talking about doing more anyway — that’s been the plan. HBO said, ‘Let us know when you have more to air.’ That’s what they said, anyway! I haven’t asked for anything in writing,” she says, with a laugh. “But we want to make sure it’s something good. This is terrifying stuff. Even with Season 2, it was scary offering up more. Our fans really love this show, and all you’re doing is potentially falling short. The fact that we pulled it off was, ‘Wow, OK, that was lucky for us.’ But how many times do we want to knock on fate’s door?”

Asked to estimate a Season 3 time frame — five years from now? three years? — Kudrow exclaims, “Oh, sooner than that, I think!” But just because the Season 2 finale found Valerie choosing to visit her ailing hairstylist Mickey in the hospital rather than attend the Emmy ceremony — where she ended up winning a statuette for her work on the fictional HBO series Seeing Red — don’t expect a radical alteration in the DNA of this sometimes vain, clueless character. 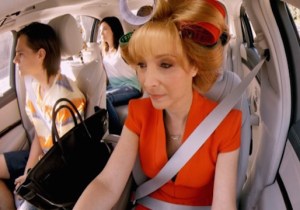 “I don’t think Valerie’s changed because of what happened. That’s not how human beings work,” Kudrow offers. “We all now can be comforted by the fact that when push comes to shove, this is a decent human being — which I always knew she was. But when the camera is on her, it’s harder to be that person.”

Speaking of which, the aforementioned finale also broke from The Comeback‘s “found footage” construct — with Valerie dashing away from her camera crew, catching a cab and rushing to the ER. Would Season 3 continue that move away from the feel of unedited documentary footage?

“That’s what we really need to talk about,” Kudrow replies. “Now that we’ve opened that door of possibilities, it would be great to use them. But we have to do it the right way. We wouldn’t radically alter the show — but it’s a new option. Or not at all. [Laughs].”

The other burning question in front of a potential Season 3: Will Valerie’s Emmy win — and the legitimization of her acting career — present a challenge to the show’s tragi-comic look at a former It Girl’s desperate quest for fame and validation? “Not at all,” says Kudrow. “If there’s one thing life does no matter who you are — it confronts you with, ‘You thought you were hot?! Remember you’re just a human being!’ [Laughs] The funny thing about Valerie is what she does with those moments. But she could win an Oscar and be booked for the next five years, and her husband might leave her.”

Seeing how The Comeback preceded — and to some extent predicted — the explosion (and the invasiveness) of the celebreality movement, Kudrow suspects the genre (and perhaps The Comeback‘s focus) will tackle the idea that “the next iteration is that we’re going back to documentaries. That’s what’s happening. The audience understands [these shows] aren’t that real after all. ‘I thought you promised us real! We want real!’ So they’re going to make it look more real by making it look like a documentary.

“That’s what’s ironic to me — when we first started Who Do You Think You Are?, it was ‘Don’t say documentary series. Let’s call it alternative reality,'” Kudrow recalls with a giggle. “Ohhhh. OK. ‘No one’s going to want to see that. And don’t say historical, either!’ Whew. ‘Historical documentary series’ — they thought we were basically saying, ‘Don’t watch the following program!'”

Excited about Kudrow’s Emmy nod? Where would you like to see Valerie’s life and career go in Season 3? Sound off below!