We’ve all heard some variation on the “priest walks into a bar” joke, but this week’s Mistresses found the zinger walking right into the church, planting a not-exactly-chaste kiss on Karen Kim’s lips and scoring an invitation to a parish mixer — Kogi truck included!

Surely this qualifies as divine intervention — even if the most open-minded of us are still trying to wrap our heads around the Lord-tell-me-this-isn’t-happening “Vivian feeds Alec toast, Alec kisses Karen on the forehead” montage that kicked off the episode. (Ditto the awkward house party for throuples, quints and quatros. Silly me, thinking the last of those relationship models was nothing more than a type of Gillette razor blade I buy in bulk at BJ’s.)

Then again, as Joss tried to tell Calista, while the Lord* works in mysterious ways, he might have more important work to do than planning random coat-room hookups, or any of the other Terrible Life Decisions (TLD… it’s a real syndrome, yo!) plaguing our core ladies at the midpoint of Season 3. [Lord’s note: Thou shall not introduce the name of the Lord thy God in a Mistresses recap, thank you very much.]

[Insert “Emergency Broadcast Signal” here.] We interrupt this week’s regularly scheduled tone poem on Karen’s spiral into crazy/beautiful to discuss a breaking trollop situation. And while I’d love to definitively say that it’s She Who Serves Up Sex With an Arizona Bartender and Deletes Text Messages From Insecure Girlfriends, I’m kinda wondering if it’s not our fair Harry who’s earned all the hissing and side-eyes this time around. Oh, sure, Niko just as likely slipped him a mickey as he slipped her his Australian boomerang, but still… He’s the one who called things off with Joss — so forgive me if I judge him a little harshly for falling off the fidelity wagon the minute his verrry recent ex was spotted in a compromising snap on Instagram.

Urgh…  I haven’t even gotten to Uncle Mark getting arrested for taking surly Lucy and Moppet Whose Name I Keep Forgetting to a strip club! Or Head- (and Abs-) master Blair maybe being an insecure little bitch. Or Calista’s story arc somehow shining a spotlight on child labor violations in China — even if said cause was merely a weapon to take down a gold-digging supermodel who, frankly, doesn’t deserve a job serving espressos at Maison Sur Mer!

With that in mind, let’s cut to pithy recaps of what (who?) went down among our four central chicas. 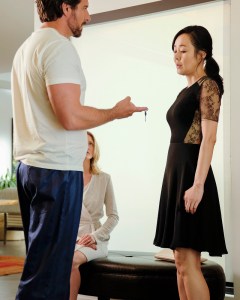 KAREN | The wahh-chicka-wahh with Alec and Vivian continues with all the intensity of Matthew McConaughey hawking Lincolns, but when the threesome ventures out to a house party for folks who find 1 + 1 = Zzzzz, Karen lets some rando get in her head about how she’ll never be more than a guest in the married couple’s home. Karen tries the morning-after sneak-out with a side order of “I have a morning meeting!” But Alec and Vivian correctly identify her as the Worst Liar Ever (something Elizabeth Grey taught us back in Season 1). They’re not letting their new soulmate/plaything (pick either/or down in the comments) slip away so easily. And in face, Alec hands her a key he’d made the day prior, so she can come (not a euphemism) and go as she pleases. “But mostly not go?” offers Vivian, who is a helluva lot more freaky than our first impression led us to believe.

APRIL | April has a really sweet moment with Mark where she discusses her complicated and not-entirely-pretty relationship with her mother, a powerhouse circuit-court judge with a carefully hidden alcohol problem. She hugs him with a ferocious gratitude — she wants to follow new beau Blair’s advice to reconnect, but he tells her to trust her own gut — but he feels something a little more… romantic? Things go awry for April’s platonic roomie, though, when he takes Lucy and his nephew to a sketchy neighborhood to see a famous graffiti mural of Angela Davis, Maya Angelou and Foxy Brown* that  April painted as a teenager. When the kids have to pee, they wind up in a strip club, Mark winds up in jail, and Blair throws some utterly unnecessary shade his way (when April leaves the room). It’s clear a rivalry is afoot, and despite Blair’s A+ab game, I’m suddenly #TeamMark. The hour ends, though, with a knock on the door from April’s formidable mama — so it’s clear that for the moment, the headmaster is in her head. 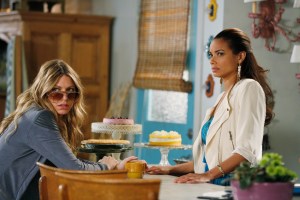 JOSS | Reeling from her breakup with Harry, Tall and Impressionable takes Calista’s advice and invites a visiting college ex to her boss’ soiree — but finds his hot kisses and tingly caresses don’t have the same appeal as they did back in the day. “I love someone else,” she says, almost to her own surprise. But that damn Niko somehow tricks Harry into looking at Calista’s Instagram — featuring a photo of Joss and said hunk in smooch mode — and next thing we know, he’s knocking back shots, singing in the round with his employees and then waking up next to Elvira Mistress of the Bar. Turns out, though, she’s not interested in a harassment suit or love — but merely sees their hookup as “a one-time thing.” That’s because (say WHA?) she’s already the mistress of Harry’s skeevy boss! Side note: When Niko rolled over in the morning, did anyone else have a “Whooooaaa! ‘That chick look like Savi!’ moment?” Or was it just me? Harry has a type: Looks like (or related to) Alyssa Milano. (Uh-huh, I went there!)

CALISTA | Calista decides she can’t sabotage Luca’s ill-gotten accessories line —since it’s part of her company and she’s not interested in losing money. Still, when he finally fesses up that he wants a divorce — and that the jewelry collection was secretly designed by his supermodel mistress — Callie From the Block puts a plan in motion. Big party at her house to promote the accessories? Check. Tons of media types in the mix? Oh, yeah. Even dubious side-piece on the guest-list? Why not! But when Luca gets up to thank the guests for coming, Calista grabs the mic and lays on a delectable story about how Luca — distracted by juggling his CEO role with his new creative endeavor — didn’t do his due diligence on their factory in China, one that employs underage workers. Zirconias By Rat Fink Turd is on hold ’til further notice — and when it does go into production, all profits will go to a new foundation for victims of labor abuse, Calista declares with a combo of glee and fury in her eyes. “See how much she loves you now,” Calista hisses, but the morning after our famous fashionista feels about as jolly as a CW actor on Emmy morning. The heart wants what it wants, but girl, the heart has to be ignored or reprogrammed when it wants a guy as skeevy as Luca, K?

What did you think of this week’s Mistresses? Sound off in the comments!