While Jane Krakowski is “over the moon” after scoring a Supporting Actress Emmy nomination for her role as Jacqueline Voorhees in Netflix’s Unbreakable Kimmy Schmidt, she knows there’s one person who won’t be sending her a congratulatory bouquet of dogs.

“Where is Mimi Kanasis?” she asks TVLine of her character’s arch frenemy (played by Amy Sedaris), before dreaming up this perfect headline: “Mimi Kanasis Found Dead from Shock on Jacqueline Voorhees’ Marble Kitchen Countertop.”

“Honestly, we have such an incredible cast and crew,” she adds. “The fact that the show also got a Best Comedy nomination [and a Supporting Actor nomination for Tituss Burgess] is just the greatest. I can’t wait to high-five everyone when I see them all.”

Below, Krakowski reflects on Kimmy Schmidt‘s first season — including one of the hardest scenes she’s ever had to get through — and looks ahead at what the future holds for Jacqueline.

TVLINE | Some critics were quick to draw comparisons between Jacqueline and [your 30 Rock character] Jenna. Do you feel like this nomination validates how wrong they were?
I understand the natural association people made because of Tina [Fey] and [Robert] Carlock and myself all working together again, but I’ve always come at these two characters so differently. They are such different characters. Initially, when only a few episodes were released, I think I understood it, but once people saw the whole season, it became much more clearly defined.

TVLINE | Jacqueline had so many scene-stealing moments in the first season. I’m sure it’s hard to choose, but do you have a favorite?
Some of my favorite moments were filming as myself in those flashbacks. I remember the day we saw the script; it said “Jacqueline at age 14, played by Jane.” I was like, “Yes! Only Tina Fey would let me play myself at 14.” I loved working with Gil Birmingham and Sheri Foster, who play my parents. That whole storyline was an interesting, unexpected backstory for the character. It was a lovely way to wrap up that character in Season 1. 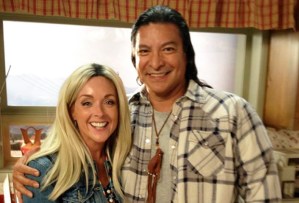 TVLINE | Speaking of Jacqueline’s Native-American backstory, were you surprised to see it stir up so much controversy?
I don’t think I was expecting it. I didn’t know what I thought the reaction was going to be, to be honest. When we were filming it, I knew it was something we didn’t see very often, that representation being shown. But I love that they gave the character such an A to Z journey, showing how hard she worked to change her whole life. Her bunker is her gilded cage, that Park Avenue lifestyle. It was such a worthwhile and lovely story to tell, absolutely.

TVLINE | While we’re talking about favorite scenes, were there any you had trouble getting through?
[Laughs] The hardest scene to film was with Ellie Kemper, where we both have the great pleasure of saying, “Your anus responds to the laser.” I think you can actually hear me laughing on Ellie’s coverage in every take.

TVLINE | When do you start filming Season 2?
Very soon! They’re writing now and we go back in August. I can’t wait to see everybody!

TVLINE | Is there anyone you didn’t get to work with in Season 1 that you hope to this time around?
There was no way for my character to have been there, but I would have loved to work with Tina [Fey] as Marcia Clark. That would have been a lovely, surreal moment for us to be in a scene together again. Maybe Jacqueline can hire that lawyer in the future; I’m sure she’ll have other legal dealings.

TVLINE | Personally, I’m hoping to see Jacqueline have more scenes with Lillian.
Oh, I was thrilled in the finale because I had never gotten to meet Carol Kane’s character. When they told me we were going to take a road trip together, I was so excited. I loved that they got to meet, and I do believe we’ll have more stuff together in Season 2; I think they’re writing a fun storyline for us, which I cannot wait for. I love her and I loved what we did together. I also hope I get to know Tituss’ character. We met briefly, burying a robot, but that was it. I hope our characters meet again.

Unbreakable fans, what were your favorite Jacqueline moments from Season 1? And what do you hope to see from her in Season 2? Drop a comment with all of your thoughts below.