For Parks and Recreation showrunner Mike Schur, Thursday’s Emmy nominations were as relaxed as a day at the spa.

After all, he’s been through more nerve-wracking situations — crafting the series finale for his beloved NBC comedy, for example.

“People in America have a real thing about finales,” Schur tells TVLine. “Everyone’s like, ‘What’s going to happen in the finale? Is the finale going to be good or bad?’ And there’s this feeling that if the finale’s bad, then the entire amount of time that you devoted to watching a show over seven years is totally ruined.”

Not to mention, this isn’t Schur’s first time at the rodeo. In addition to receiving an Outstanding Comedy nod on Thursday for Parks‘ final season, the show was nominated for Season 3 in 2011 — an experience that Schur calls particularly “special” because cancellation was presumed to be around the corner for the Amy Poehler-led comedy.

Below, Schur gets candid about Parks‘ “sweet” Emmy nomination, the cast member with whom he celebrated the nod and why he hates watching reruns of his own show.

TVLINE | Were today’s nominations a source of nerves and anticipation for you, since it was Parks‘ last chance to be recognized?
No, quite the opposite. It was so far off anyone’s radar that it took me probably 15 minutes after people started texting me to realize what was going on. The texts came in saying, “Yay!” and “Great news!” and I assumed it was for Amy [Poehler, who received a nomination for Outstanding Lead Actress in a Comedy Series]. Everyone pretty much assumed that Amy was going to get nominated, so I really didn’t look at my phone or pay attention. And then suddenly, it happened enough where I said, “What the hell is going on?” It was so far off everyone’s radar that I really didn’t think it was possible. It was an actual, true, legitimate, no-kiddin’ surprise.

TVLINE | Does this nomination mean more because it’s for the final season, or would you be just as excited if this was recognition for Seasons 1 through 6?
It’s one of those things that’s just rare and special and wonderful. I’ve been on shows where it has happened and you didn’t expect it to. I’ve been on shows where you expected it to and it didn’t happen. I’ve been on shows where you expect it to and it did happen. I’ve been through every version of it. Anytime people stamp your name in a box and acknowledge the work that you’re doing, it feels amazing. It’s a really lovely feeling. It’s very nice that it’s the last season, mostly because — besides the fact that it’s nice that people watched it and liked it, or at least heard it was good and decided to vote or something [Laughs] — we all get to get back together. There will be a party where we all get to see each other again, and that’s really sweet. Everyone is very aware of how rare it is. We shouldn’t take it for granted, and that’s what the tone of all the calls and emails and texts have been about. Like, “Holy s—t, this is amazing!” [Laughs] 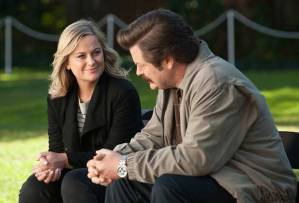 TVLINE | How many cast or crew members have you had a chance to share this with today?
I was actually on the phone with Aziz [Ansari] when the news broke. He’s on a book tour, and Alan Yang and I — who was a writer on Parks from the beginning — were editing the show that he and Aziz created for Netflix. So we were having a conference call about this cut when the news broke. That was really nice, like, “Hey man! Look what happened!”

Amy’s in London doing press for Inside Out, but we’ve been texting back and forth. I’ve heard from Nick Offerman and a lot of the producers and Adam Scott. It was a real flurry of, “Oh my God, oh my God, oh my God.” There’s a giant writers email thread that’s been going on for, like, nine months just about dumb stuff and dumb jokes, and that’s now been taken over by everybody being happy about this.

TVLINE | You previously got an Outstanding Comedy nod in 2011 for Season 3. Did that ever influence the way you crafted the show moving forward?
That season was special because we had been moved to midseason by NBC, and we thought, “Oh, this might be it. This might be our last year.” We really went for broke. That was the year that April and Andy got married after only dating for three weeks, and we accelerated Leslie and Ben’s relationship. It was mostly because we thought, “Well, we might be done. We have to move everything forward.” If anything, the nomination didn’t influence it, but the way that we wrote the show changed because of that season. We decided to go for broke all the time. The season premiere of that season was called “Go Big or Go Home,” and that became the motto of the show for the whole time we were on. The only thing that really influenced the show was the show itself. I don’t know what we would have changed, even if we wanted to change something. Getting nominated for an award is such a nebulous and rare event, I’m not sure you can draw any conclusions from it one way or the other.

TVLINE | Despite how satisfied you personally felt with the final season, was there ever a moment when you were legitimately nervous about how the last episodes would be received?
You never feel totally satisfied. [Laughs] Sometimes when I turn on my TV, a rerun of the show will be on, and if I watch it for more than 30 seconds, I start cringing and thinking, “Why did I edit that that way? That’s all wrong!” [Laughs] It’s part of the deal that you always feel like you ruined everything.

The only time I felt for-real nervous was before the finale aired. People go a little nuts around finales, and so I really just thought, “Please don’t have that feeling about this.” You don’t have to think it’s the greatest episode of all time. I just didn’t want people to watch it and go, “Well, now I hate everything!” [Laughs] As long as that wasn’t the case, I figured it was going to be OK.

Excited to see Parks and Recreation get an Emmy nod? Hit the comments!