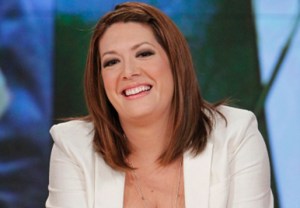 It’s official… and not at all surprising: Comedian Michelle Collins is joining The View as a permanent co-host for its upcoming 19th season.

The big announcement, which technically leaked last week, was made official during Monday’s live episode, with the latest addition to the ABC talk show making her grand entrance to the tune of Jay-Z and Alicia Keys’ “Empire State of Mind.”

These past few months have been the most fun and exciting of my career, and I couldn’t be happier to join such an awesome, smart, accomplished and funny group of women. Ever since the age of 4 — and the height of 5′ 6″ — it’s been my dream to host a talk show, and the fact that I now get to do just that every day with an amazing, hard-working team of producers, writers, cast and crew is beyond my wildest expectations. Many thanks to the people at ABC for inviting me to be a part of this team, and specifically to the great Barbara Walters and Whoopi Goldberg, whose support has meant the world to me.

–
Though she’ll regularly appear on The View until it goes on hiatus next month, Collins won’t be an “official” co-host until the show returns for its 19th season in September.

Are you glad to hear this addition confirmed? Are you disappointed? Are you feverishly Googling both “Michelle Collins” and “The View” to find out what we’re even talking about? Drop a comment with all of your thoughts — if any — below.