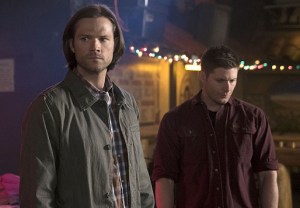 Supernatural fans, say thanks to The Darkness — because it will bring the Winchesters back together in Season 11.

“We’re really proud of last season,” executive producer Jeremy Carver said at the show’s Comic-Con panel on Sunday. “We had a lot of intensely personal character stories. This year, we are going to have a little bit more of an epic feel with a Big Bad and a real quest for the brothers to unite.

“It’s like pre-biblical story that’s never been told,” the EP continued. “Most importantly, I feel like the brothers are going to be really, really united in their need to take this thing down.”

That was good news to stars Jensen Ackles and Jared Padalecki’s ears, who both expressed excitement about having the brothers on the same team.

“I think we’ll beat [The Darkness] because we’re not the Losechesters,” Padalecki joked before adding, “I’m happy to see them teaming up.”

Following the release of the epic evil, “now we’re left with the cleanup,” Ackles previewed. “Now it’s figuring out how to deal with the decisions we have made. What I like about where we’re going is the brothers are united, similar to Season 1, when we were looking for dad. We’re back to normal so to speak and we have a common target.”

More highlights from the SDCC panel:

* Some fan favorites will return, “but they’re coming back in surprising ways,” so Carver couldn’t share any more details.

* Asked if there will be more atypical hours like the meta installments, EP Andrew Dabb hinted at “something really fun” in Episode 4.

* Castiel will be united with the boys against the Big Bad.

* “I’m pretty dead,” Mark Sheppard said of Crowley’s future. (Suuuure.) “It’s been an amazing journey. I showed up as a guest star, kissing a very tall man under a bridge.”

* As for why Felicia Day’s Charlie was killed off, Carver said they have to take the story where it goes. And given that it’s Supernatural, “people die on the show,” he explained. “If we do our job right, people fall in love with the characters.” Ackles added that the character was originally slated for just one episode, so “we should be thankful for the time we got to spend with her.”

Excited about these Season 11 teases? Sound off below!