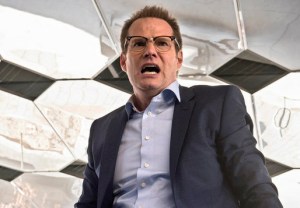 You think you’re excited about Heroes Reborn? Showrunner Tim Kring may have you beat.

But it won’t be easy. Kring explained that when the sequel series picks up five years after the original, the general population is not only aware of the evolved humans’ powers but discriminating against and hunting them.

“In the first series, when you discovered you had a power, it was this mystical, ‘What’s happening to me?’ thing,” Kring said. “Now, if you wake up with a power, it would be a very, very bad thing. It takes the idea of the show and cranks it up a little bit.”

Many of the original Heroes cast members will be returning for the reboot, including Oka as Hiro Nakamura, Grunberg as Matt Parkman and Sendhil Ramamurthy as Mohinder Suresh. When asked if longtime viewers will be treated to a glimpse of other fan-favorite characters — among them Hayden Panettiere as Claire Bennet and Milo Ventimiglia as Peter Petrelli — Kring said the audience will at least learn what happened to those staples during the time jump.

“The universe that we’re building around the show does all that,” Kring said. “We do unpack what happened in the previous years. By the time you watch the finale, you’ll have a big chunk of that answered for you.”

That said, Kring insisted it was never his idea to bring back the entire Heroes cast, adding that it “really wasn’t a matter of who we could and couldn’t get. It was a matter of what the story was dictating.”

If you’re wondering which of the original characters was most crucial to Heroes Reborn, look no further than a pair of horn-rimmed glasses.

“The lynchpin from the former cast was Jack and his character,” Kring told the crowd. “HRG was a hub character that a lot of the other stories spun off of. It was really important for me to bring him back.” (As for HRG, he’ll be attempting to live a “nice, suburban life” when the series picks up, per Coleman — a pipe dream that is quickly squashed just minutes into the series premiere.)

And while Kring is certain that Heroes Reborn will bring in new viewers unfamiliar with the original series, he promised that none of the established storylines will change.

“We’re not deviating from anything,” he confirmed, adding that the team behind the show “really wants to honor anyone who spent all that time watching that many episodes.”

OK, your turn. Are you excited for Heroes Reborn? Watch the new extended trailer below, then hit the comments with your thoughts on Sunday’s panel!