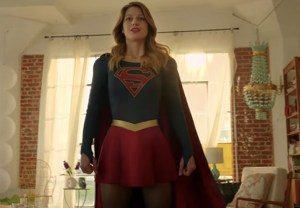 A female hero is taking to the small screen — and it’s about time, says the creative team behind CBS’ Supergirl.

After shepherding Arrow and The Flash to TV, executive producer Greg Berlanti “felt like it was time for a female lead at the center of one of these shows,” he said at the show’s Comic-Con panel on Saturday.

“It was a story that needed to be told,” EP Ali Adler added. “You come in and see her as female and you’ll remember her as powerful. Her gender doesn’t really matter. She’s a badass.”

The CBS series also features a strong female presence behind the scenes, with Alder for starters. “It’s important to have women involved in every show in production,” EP Geoff Johns declared.

* Like Stephen Amell and Grant Gustin, star Melissa Benoist was the first person the producers saw for the title role.

* The beginning of the season will introduce the villains Reactron and Livewire. Additionally, Nurse Jackie alum Peter Facinelli will play Maxwell Lord.

* “We were heavily influenced by the [Richard] Donner vision” a la 1978’s Superman, EP Andrew Kreisberg said of the show’s grounded tone.

* CatCo colleague “Winn [Schott] is in love with Kara before he finds out she’s Supergirl,” portrayer Jeremy Jordan described. Alas, “There’s another very strong, attractive male standing in the way” — in the form of Mehcad Brooks’ James Olsen.