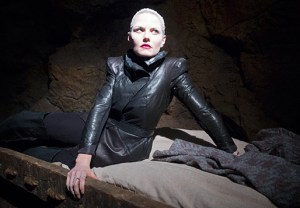 Fresh from her trip to [wherever the heck she ended up in the season finale], new “Dark One” Jennifer Morrison was joined by her Once Upon a Time co-stars Saturday for the ABC drama’s panel at San Diego Comic-Con, where moderator Yvette Nicole Brown got everyone to ponder what the future might hold for each of their characters.

“A lot of Season 4 was about her confidence being shaken,” Morrison said of Emma and the secret that Snow and Charming kept about her origin. “It cut her belief in herself.” Moving forward, Morrison said, “She’s going to face the darkness in herself … instead of repressing it.”

Speaking of Emma’s darkness, the panel featured a super-disturbing clip of the new “Dark One,” now in captivity in another world. Watch it below:

–
On the topic of why Emma succumbed to darkness in the finale, Morrison said, “If Regina were the only person in danger, [Emma] still would have made the same choice … but the darkness was threatening the entire town. If that darkness wasn’t tethered to one human being, it would have destroyed the whole town.”

Now for a rundown of the panel’s biggest and best reveals: 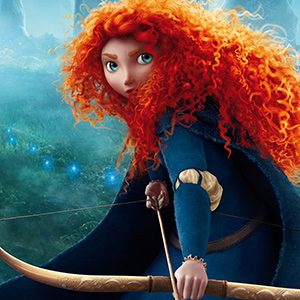 * Brave‘s Merida (played by Amy Manson) will be a featured character in Season 5. The audience was treated to a brief clip of the red-headed heroine during target practice.

* The 100th episode, though shrouded in mystery, will be Season 5’s spring premiere. “We want to make it very special,” executive producer Eddy Kitsis said. “We’re hard at work not telling you anything right now.”

* Robert Carlyle teased a “slightly different” Rumpelstiltskin in Season 5: “He’s lost his mantle as the Dark One, but that’s not to say he doesn’t have the same kind of trickery about him. … And Mr. Gold is presently in a coma, so he’s not doing too much.”

* On the topic of Hook’s redemption, Colin O’Donoghue explained, “He found love with Emma, so he’s desperately trying to hold onto that, be the better man and keep her heart safe. But he has been a villain and his girlfriend’s nasty now… in a good way. He really struggled with staying on the right path, so it’ll be interesting to see where he goes now.”

Who are you more excited to see in Season 5, Dark Swan or Merida? Drop your hopes (and fears) for the future below.