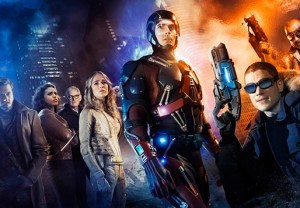 “Legends of Tomorrow, all it is is the crazy ideas. It’s bonkers.”

“It was important for us not to do the same show” as The CW’s aforementioned superhero dramas, the EP continued. “We really wanted to do something different.”

But first, the early episodes of Arrow and Flash‘s new seasons will need to do some tablesetting for the spinoff, as will a forthcoming crossover event.

Then at midseason, Legends kicks off with the fight to stop immortal Big Bad Vandal Savage, who has “been around for thousands of years,” Kreisberg said. “Part of the fun of the show is: How do you defeat somebody you can’t kill?” As the ragtag group of heroes clashes with Vandal Savage in several different time zones, they’ll be finding out if what they do in one timeline affects the rest of history.

Also revealed in the Legends of Tomorrow SDCC panel discussion:

* As viewers saw with Arrow‘s Thea, “The person who goes into the pit isn’t necessarily the same person that comes out,” Caity Lotz warned of Sara’s return. “There’s consequences to that…. I want [Sara] to go nuts.”

* Hawkman will play a role in the series, which currently costars Ciara Renee as Hawkgirl.

* How will baddie Captain Cold fit into the group of do-gooders? “I think he’s going to respond badly,” Wentworth Miller answered. “Leonard Snart is used to being the guy in charge. He’s not a team player. … These guys have to work together, but it’s going to be a bumpy ride.”