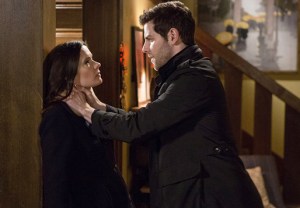 Grimm fans — at least those holding out hope for Juliette’s revival — were dealt a crushing blow Saturday during the show’s panel at San Diego Comic-Con.

When asked if there’s a chance Nick’s true love can be brought back to life, executive producer David Greenwalt didn’t even hesitate before simply replying: “No.” (For what it’s worth, this answer came after fans were shown footage of Juliette’s funeral from the Season 5 premiere.)

Read on for each of the stars’ teases for their characters’ futures:

* David Giuntoli promised “a lot of revenge” from Nick in Season 5, though he’ll also have his hands full doing some “bizarre” co-parenting with Adalind. “He lost his girlfriend, he lost his mom … and the baby is kind of the reason for him to keep going,” Giuntoli said.

* Hank will (allegedly) find true love this season, a revelation which came as quite a surprise to Russell Hornsby, mid-panel.

* Bree Turner teased that skeletons from Rosalee’s past will cause “major problems” for her and Monroe: “Rosalee came onto the scene very guarded, dealing with a past of addictions, and that’s been shelved for good reason. … I think her addictions [are about to] come back into the story.”

* “I’ve heard it’s going to be a hard freshman year for me,” Reggie Lee said of Wu’s new in-the-know status.

* The Royal Family “won’t be as much of an issue” for Renard in Season 5. “That’s been quelled for the time being,” Sasha Roiz confirmed. “There’s a lot of political opportunity for [Renard] coming up, at least regionally. We’re getting back to a lot of the mythology of Season 1.”

* “This baby is all she’s got in the world,” Claire Coffee said of Adalind. “She’s lost her powers, again, but I think this time the focus will be the baby and finding a job. She’s a lawyer — I assume a very capable lawyer. She’ll scour Craigslist for a few episodes.”

Your thoughts on Grimm‘s Comic-Con panel? Hopes and fears for Season 5? Drop ’em all in a comment below.