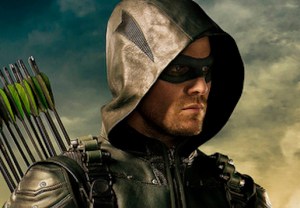 The Arrow is getting a makeover.

A new suit for the titular character was revealed at Arrow‘s Comic-Con panel on Saturday night.

Star Stephen Amell — who came out in his new “Green Arrow” duds — gave credit to Maya Mani, who has “made every single suit on our show since the original Arrow costume,” he said. “She nailed it.” (Keep scrolling to check it out.)

The new getup signals a big transformation for the titular hero. “We’ve always said the progression for Oliver is very much from the Arrow to Green Arrow,” executive producer Greg Berlanti described. “This is first real stop in that direction.”

With that evolution also comes a new attitude, although “the show isn’t going to suddenly to become a comedy,” EP Andrew Kreisberg said. “When the season starts, he’s in much a better place. He’s happy. He’s in love. That feeling infuses all the characters. There’s a little bit more fun [and] more humor.”

Added EP Wendy Mericle: “We actually get to have Oliver make some jokes in the lair, which is a first,” and get to see what it’s like to have him in a relationship.

Other highlights from the SDCC session:

* In addition to Damien Darhk, “there’s another big [DC character] coming,” Geoff Johns teased. “There’s a lot of characters coming up that people won’t really guess” from the DC Universe. Two that were unveiled during the panel: Anarky, who may be familiar to Batman fans, and Mister Terrific, who works with Felicity and is a good friend of hers, Berlanti previewed. He also happens to be the show’s first gay character.

* Diggle is finally getting a costume! It involves a helmet, star David Ramsey hinted.

* Malcolm will be back in his hood in Episode 3.

* John Barrowman would like to see more verbal sparring between Felicity and Malcolm. “Strong female roles are awesome,” the actor said. Amell also noted now that everyone knows everyone’s business, there’s more interaction between folks like the aforementioned two and Laurel and Thea.

Get a first look at the new green duds, then scroll down and press PLAY for TVLine’s exclusive interview with the cast, then check out a Season 3 recap and Amell’s entrance as the Green Arrow. 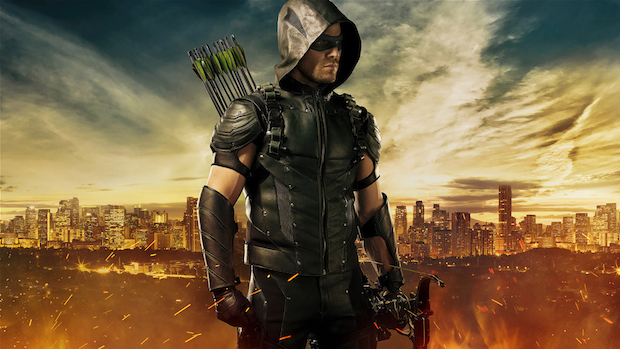