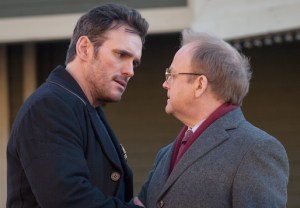 This week on Fox’s Wayward Pines, Pilcher and Pam sought to suss out a subordinate, Mrs. Fisher played mind games, the origin of Ethan and Kate’s affair was revealed, and the resistance made a breakthrough.

WIGGED BEN | Hospitalized after surviving the bomb blast in the back of Andy’s delivery truck, Ben gets an earful from Mrs. Fisher, who reveals/spins that Ethan at one point had the conspirator in custody but let him go, partly out of deference to his onetime affair with Kate. When Ben later throws that judgment call in his dad face, Theresa sees right through Mrs. Fisher’s machinations – and later warns the teach to stop tinkering with her boy – but Ben nonetheless sees error in his father’s ways.

BLAST FROM THE PAST | After being chastised by Ben, Ethan privately discloses to Theresa that he has been down this road before, shouldering guilt for letting a bad man go free. He relates a professional incident where he had a known terrorist in his custody but was compelled by higher-ups to release the man. In doing so, Ethan afforded the suspect opportunity to enact an incident known as the “Easter Massacre.”

SIBLING RIVALRY | Convinced that someone on surveillance cam duty must be looking the other way, if the resistance was able to act in so concerted a manner, Pilcher charges Pam with investigating the staff. Meeting with surveillance team members one at a time, Pam pokes and prods to find weaknesses in temperament or resolve, but comes up empty – except with one quiet galoot, who copped to erasing recordings of citizens merely questionings life in Wayward Pines as they all do. Though Pam sees validity in the staffer’s judgment call, Pilcher holds firm that any hint of dissension or disobedience among their team’s ranks (sisters included, ahem!) must be nipped in the bud. So at episode’s end, Pilcher speechifies about exactly that, as the staff watches their “guilty” colleague be put to a quiet death in the same cryo chamber that brought him here.

THE NUTTY CONFESSOR | In flashbacks, we saw that shortly after he own arrival in Wayward Pines – her head filled with the idea that she had walked into a government experiment – Kate went quite cuckoo, and even was fitted for a straight jacket and rubber-walled accommodations. For a while, she would wildly grill “Dr. Jenkins” about what sort of experiment (social or biological) she was party to. But over time, she (seemingly) backtracked on her contrarian conspiracy views, to Pilcher’s satisfaction. Back in the “present” (meaning 4028), Kate clashes with the town’s puppetmaster, revealing that she knows him to be the mighty Pilcher.

DON’T FENCE ME IN | Following the premature bomb blast, Andy is mortally wounded, under Harold’s care in the middle of the forest. And soon enough, Andy succumbs to his wounds and passes. Harold is poised to bury their fallen comrade then and there, but Alan recoils at the idea of interring Andy in the land that he fought so valiantly to escape. Rather, Alan insists on making another run at the fence, to bury Andy in “free” soil, and then venture on to California. The men appropriate a big rig to barrel trough the barrier, but Harold begs off just before the final charge, saying he can’t leave Kate behind. So with only dead Andy riding shotgun, Alan revs the engine, steamrolls toward the fence gate and successfully crashes through.

On the other side, Alan celebrates his “victory” and is poised to give Andy a proper burial… when a gaggle/flock/murder of abbies emerge from the shadows to savagely devour the fresh prey.

What did you think of Wayward Pines‘ antepenultimate episode?