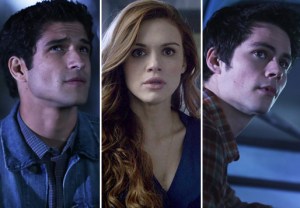 If you’re already exhausted from the spine-whipping, tail-cutting, Doctor-dreading action Teen Wolf‘s fifth season has served up thus far, you might want to sit down before continuing on.

For starters, we could be witnessing the beginning of the end for the show’s key bromance:

“Something happens in Episode 5 at the beginning of the episode that causes a rift between Scott and Stiles,” Davis revealed, a tease met with an understandable amount of boos from the audience. “It’s something that Theo uses,” Davis added. Shocker: More boos.

Speaking of things crumbling, Posey teased that Scott’s days as the pack’s alpha might also be coming to an end:

“He normally knows what he’s doing and has a plan of action for everything … but things are falling apart around him,” he said, adding that, for the first time, Scott realizes he might not be the best person to lead the pack. “He’s kind of lost. It’s something we haven’t really dealt with before.”

As for the elusive Tyler Hoechlin, don’t count on seeing him back in Beacon Hills anytime soon… or ever. “Tweet him and tell him to get his ass back to Teen Wolf,” Davis urged fans, which prompted Posey to call the erstwhile Derek Hale on speakerphone.

“I miss Derek very much,” said a very sleepy Hoechlin. Cue the applause.

Your take on the cast’s Comic-Con reveals? Are you worried about Scott and Stiles’ future? Hopeful for Derek’s return? Drop a comment with your thoughts below.