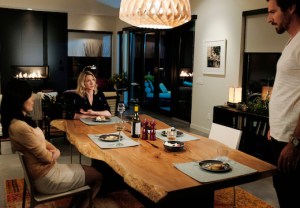 Oh, if the walls of Maison Sur Mer — the home-furnishings oasis owned by Mistresses‘ April Malloy — could talk. They’ve already seen a ne’er-do-well husband fake his death; an ab-tastic FBI agent deliver an oversized canvas that, by all scientific measures, should’ve burst into flames from the glistening bodies (and acrylic colors) that painted it; and some light blackmail, adultery and overzealous day drinking for good measure.

Now, thanks to Dr. Karen Kim (University of Blind Optimism, Class of ’90), the lush tablescapes and 1,000-thread-count sheets have witnessed a treat tray getting unceremoniously dumped on a tile floor. I mean, there really was no other way April could appropriately respond to Karen dropping an out-of-nowhere, seven-word grenade: “I had sex with Vivian and Alec.”

Granted, Karen’s that friend — we all have one, right? — the one who slept with her married, dying patient, then bedded his grieving son, only to see the latter hottie shot down in a gun altercation with his raging alcoholic mother. So maybe, armed with that knowledge, April should’ve just passed the chicken salad and asked, “Now who did what to whom?”

And yet the penultimate scene from “Threesomes” — buff, bearded Alec busting into Karen’s group marriage-counseling session; her eyes twinkling with visions of her polyamorous spouses nestled snug in their beds — made me wonder if, at this exact moment, Karen is the closest to fine (hi, Indigo Girls’ reference) of our four central characters.

Crazy, right? But just go with that theory while I attempt to pithily recap the action from this week’s installment!

APRIL | With “Uncle Mark” helping her, April Facebook-stalks Lucy’s headmaster and winds up at his yoga class — whoops, make that hot(-mess) yoga. Suffering from mild dehydration, she still manages to ask him out to dinner — and he says yes! (“Seven have tried, seven have failed,” observes an impressed classmate, played by All My Children’s Chrishell Stause.) April’s boss-tasticness, however, escapes her when they get to Wunderbar, her eyes registering horror as her mouth spills out factoids about proper sushi etiquette. Does it help that Mark — who looked 36 percent too smitten by the sight of April in a minidress — keeps interrupting with texts about Lucy? No, it does not. But Blair returns the next day with a huge rose bouquet and a desire to hit the reset button. He even goes in for a kiss — ’til Mark just so happens to return all sweaty-hunky-casual from jogging. “You’re the babysitter,” says lumberjack-y Blair (who knows via April that he’s actually her “dead husband’s mistress’s son’s uncle” who lives with her). And Mark’s all, “Bartender, poet, surfer, carpenter.” Wait, he’s good with his hands? Maybe the two of ’em should go out to the yard, take off their shirts, and settle it like men. No, not fisticuffs, but a good old-fashioned wood-chopping contest!

CALISTA | I’m trying to come up with a zinger about how Luca rhymes with Puke-a, but it’s just too terrible to put it in this recap. Whoops! Just did! See how Calista’s rat-fink husband ruins everything!?!? In a nutshell, he spends the night somewhere other than their bed (but sends her breakfast delivery?!), then complains she doesn’t understand what it’s like to be the Watson to her fashion-designer Sherlock. Won’t she just sign the papers OKing his accessories line using the Calista Raines company font? She relents — probably thinking her generosity will prompt him to accept her invitation to marriage counseling. But it turns out the contracts she signed actually give him ownership of his accessory creations — which you just know are gonna be hella tacky. Consolation prize? Calista’s been getting it in with her hot, young assistant — and even better, she gets to drink martinis during work.

KAREN | Lemme try to bang this out (pun intended) in just a few sentences. Karen goes to Vivian and Alec’s for dinner a few days after their ménage-a-trois, but unbeknownst to the ladies, Alec’s invited a coworker in some wildly misguided blind-date setup for their new pal/marrow donor/freak in the sheets. The Port hasn’t even been poured when Vivian asks the fella to scram, and before you can say “Bye, Felicia,” she and Karen both admit they “felt something” during their tryst. (Was that something Alec’s sapling and mangoes? Sorry — that lob called for an overhead smash!)

Anyway, Karen — who has somehow been recruited by her parish priest (!) to provide group marriage counseling, which in turn, fuel her Red Shoe Diaries-style daydreams — flees the scene when Alec and Vivian begin to spar. But all’s well that ends with a half-dozen intertwined limbs? Um, not quite. Alec does show up at the end of Karen’s session asking (not-exactly-hypothetically, I’m sure her patients notice) how do you fix a marriage where one spouse was expected to die, then lived, but it broke their union in the process? What do you do if “something strange and taboo and unimaginable” changed the form of that marriage? Would she take the risk? Karen might as well say, “Group dismissed! And does anyone know of a nearby hourly motel?” But instead she answers him that she sooooo would. But let’s take a bet: Don’t you think either Alec or Vivian would rather be on a bicycle than a tricycle, romantically speaking? I just worry our sweet, gullible Dr. Kim is gonna end up face-down in front of her couch next Sunday morning — with three empty tubs of Chubby Hubby, a fingerprint-stained wine glass and a head full of regrets to show for it.

JOSS | Joss and Harry kick off the week discussing the text message she sent that he never got (remember how that stank-ho bartender deleted it)? That crack of doubt grows into a fissure. Scott calls her to get his grandma’s ring back — and reveals he’s already engaged again. To his ex. The one he said he didn’t love. And Harry doesn’t really want to hear about it. The new couple attempts to go on their first date — but it blows up when Joss asks Harry why he doesn’t want to move in, and it turns into another round of “Dooood, I gave up my sister to be with you!” Ultimately, Harry scratches their romance off his summer menu: “I can’t do this anymore, Joss. It shouldn’t be this hard.” He thinks she was right all along — that it’s too soon for them to make it work, that they’re just not ready, that they should take a break before their love turns to hate. And I want to yell, “Oh for cryin’ out loud you hot Aussie jerk, just grab her and kiss her and make it all better!” But he’s probably right – and if there was a market for it, he might have the inside track on an Idiot’s Guide to Dating Your Former Sister-in-Law. But as it turns out, Harry looks devastated, Joss is weeping and the future is blurrier than Elizabeth Grey’s vision following an afternoon bender. Sound off in the comments if you think Joss and Harry will/should make it!

OK, your turn. What did you think of this week’s Mistresses? Ready, set, discuss!