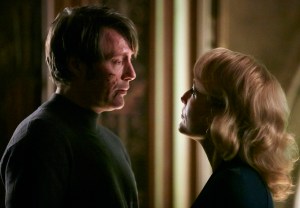 Ask not what Dr. Lecter’s last supper would look like, but rather, whom.

That’s just one of the thoughts that went through my head during this week’s tense, sexy, disgusting and at times utterly confounding installment of Hannibal — which found our titular sociopath attempting to truss up loose ends in Florence, while other characters engaged in sex so kaleidoscopic that I wondered if NBC should label it TV-WTW (what the WHAT is happening on my TV screen?)

The good news in all this is that, after five weeks of Will Graham’s sloooooow and deliiiiberate philosophizing — and That Super Filthy Dude Groaning in the World’s Worst Solitary-Confinement Cell – we finally got some actual plot developments with actual stakes involved.

So without further ado, let’s get inside Will’s head — or at least what went down during “Dolce.”

MS. DUMARIER REGRETS SHE’S UNABLE TO LUNCH TODAY | Don’t judge me for luxuriating in the way everything Bedelia Du Maurier says sounds like sex and threats and maybe quaaludes all at once. (“Did you watch as the wild beast within him turned from the teat and entered the world?” Mmmmmm.) Suffice to say, as Hannibal returns home from his violent showdown with Jack, Gillian Anderson’s alter-ego has packed him a (very small) bag and is bidding him bon voyage. “I knew that you intended to eat me. And I knew that you had no intention of eating me hastily,” she purrs. Hannibal swallows hard. “I have not marinated long enough for your tastes,” she adds, reminding us that she may not be edible yet, but she is definitely a full plate of crazy. Somehow, B thinks this is an opportune time to get all up in her cannibal lover’s vicious teeth and jaws — “You may make a meal of me yet,” she says softly, planting one on his lips. “But not today.” He does not tear her face off, and so the freaky couple lives to dance another day, perhaps? 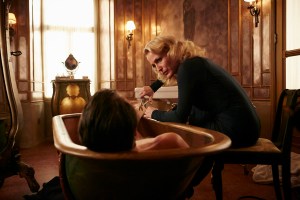 Later, we see Bedelia literally freebasing her alibi — shooting herself up with the same cocktail Hannibal used to sedate Miriam Lass. Jack and Will discover her (after Chiyoh has come and gone, amusingly) and they’re not buying any of her “my husband is a doctor, he’s been treating my condition” identity confusion. It doesn’t help that “Mrs. Fell” takes an almost mocking tone in her conversation, but Jack admits he’s less angry than he is impressed — mostly by the fact that she’s not been turned into Bedelia Bourguignon. Our last glimpse of the lady is her interrogation by a bent Italian cop — do they want to kiss each other or hit each other, I dare not guess – but it’s clear she’s willing to give up Hannibal’s likely whereabouts, if it means she can avoid prosecution/persecution. I’m not sure I’ll ever understand Bedelia’s motivations — I mean, if you’re hanging with a man who literally views your internal organs as nothing more than ground chuck, is there any compelling reason not to flee the zip code, let alone the country? — but she’s been one of the more fascinating components of an uneven Season 3 platter, so for now let’s not say goodbye, but “until we meet again.”

JACK’S BACK | Jack and Will have a thoroughly ridiculous conversation as Pazzi’s disemboweled corpse is cut down from its perch. “Why didn’t you kill him?” Will asks. To which Jack replies, “Maybe I need you to.” Um, no. Dude, you work for the FBI, and Dr. Lecter treated your carotid artery like a dart treats a helium-filled ballon — so forgive me if I have to roll my eyes over your pronouncement that you delayed putting down a heinously violent and incredibly intelligent criminal so you could test the rocky loyalty of a mentally ill former co-worker. (OK, rant over.)

Will tracks Hannibal to the Uffizi, where his fuzzy logic persists — “Every crime of yours feels like one I’m guilty of – not just Abigail’s murder, but every murder” — and the former BFFs compare themselves to conjoined twins, not knowing if either one can survive detached from the other. They stroll outside, and just as Will is pulling a blade to “return the Season 2 finale favor” (so to speak), Chiyoh, takes aim and shoots him in the shoulder from her rooftop perch. (The Italian police are on strike this week, I presume?) 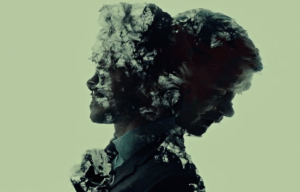 Next we see ’em, Hannibal is tending to a sedated Will’s wound — and making some kind of soup (!!!). “What’s for dinner?” Will asks, woozily. “Never ask, it spoils the surprise,” replies our titular sociopath, and I cannot suppress a delighted guffaw. I mean, Hannibal is a literal nightmare, but his dark sense of humor never fails to land. Will and Hannibal’s faces begin morphing into each other — it’s a collage, it’s a Rorschach test, it’s really pretty to look at — but I’m not sure if one or both of ’em has some skin in the game (or in the soup that Will isn’t so fond of.)

Jack and Chiyoh arrive at the late Prof. Soliato’s apartment at the same time, eyeing each other curiously, but only Jack enters the flat.  As he spies Will in the dining room, his old pal utters the five chillingest words on TV in 2015: “He’s under the table, Jack.” Bam, Crawford’s tendon is cut. Boom, he’s suddenly seated for dinner, too. But why is Will strapped down to his seat?

“Jack was the first to suggest getting inside your head — now we have the opportunity to chew quite literally what we’ve only chewed figuratively,” Hannibal says blithely, taking out a beautiful, decorative wooden box inside of which he’s storing… a circular saw? As Jack screams for him to stop, Hannibal goes to work on Will’s head, the blood spewing so artfully you could almost imagine the end product hanging right next to Hannibal’s favorite Botticelli.

But something must happen to stop the unspeakable blade-on-skull horror. We cut directly to a freezer filled with slaughtered pigs — and the bad little piggy (Will) and the one who had roast beef/human flesh (Hannibal) are hanging upside down there, too. Yes, they’re guests of Mason Verger — and he’s welcoming them to Muskrat Farm. Which leads me to conclude that next week’s hour is going to be a literal and figurative bloodbath. (Was it Bedelia’s cop pal or Chiyoh or someone else entirely who’s getting a bonus check from Mason? Hrmmmm.) 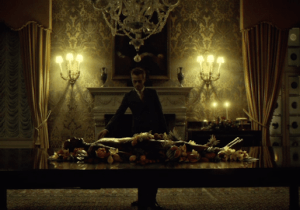 MASON, JARRINGLY | Speaking of Mason — let’s review his actions (and the actions of those around him) leading up to Hannibal and Will’s capture. We initially see Mason’s right-hand man cooking pig tails to look like human fingers — a challenge I would love to see replicated on Food Network Star — but then the henchman has a better idea for putting Hannibal on a plate. “We could ‘Peking Duck’ him,” he smiles — pump Hannibal’s skin with air, glaze it with a hot honey and hang him by his neck til he dries. Mason promptly engages in a fantasy where he’s about to feast on his maroon-glazed enemy, yelping, “Transubstantiation!” right before he wakes back up in reality.

Meanwhile, Margot wants a baby — and since her brother continues to live, she continues to placate him. She and Alana are doing their best to track Hannibal, to make sure the Italian police are more interested in collecting Mason’s bounty than putting the Most-Wanted criminal behind bars. Even worse, though, Mason wants a baby — and when he says he thinks he’d be a good parent, you wonder what kind of doomsday scenario is playing out in his mind.

Out of nowhere, we get a Margot-Alanna sex scene where faces, limbs and Bryan Fuller Only Knows What Other Body Parts spin and whirl in hypnotically brilliant fashion. (Yes, Alanna, the super-hot black and white plaid pantsuit paid dividends.) In the afterglow, though, Margot begins discussing her future needs, and asks a question (clearly pertaining to her brother) that’s creepier than any one of Hannibal’s special ingredients. “Do you have any experience harvesting sperm?” Wait — someone’s gonna get nekkid with Mason?! I think this is where we all look over to Bedelia’s table and tell the waitress, “I’ll have what she’s having!”

What did you think of this week’s Hannibal? Which scene freaked you out the most? And how ugly will things get at the slaughterhouse next week? Post your thoughts and theories below!