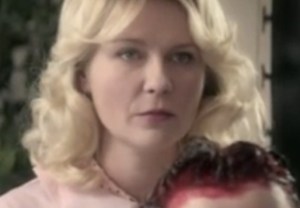 Snow, Minnesota accents and one disconcerting trip to the hair salon: That’s what you’ll find in the latest teasers for Fargo‘s second season.

The videos below don’t offer much in the way of plot, but you will get a glimpse at the FX drama’s new cast members, including Kirsten Dunst, Ted Danson and Patrick Wilson.

Fargo returns for Season 2 in September.

* A&E announced Wednesday that it has ordered The Infamous, a hip-hop crime drama pilot to be written and exec-produced by Joshua Zetumer (RoboCop). Set in Los Angeles, against the backdrop of real events in the 1990s, The Infamous centers on two complicated men: an ambitious reformed gangster poised to break out of South Central and the LAPD detective who wants to take him down.