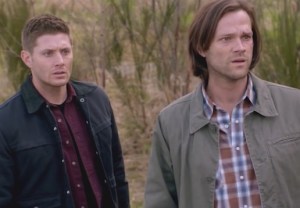 It’s the end of the world as we know it — again — on Supernatural.

Last season’s finale found the CW series shrouded by Darkness — literally — as the Mark of Cain was removed from Dean’s arm. But without a new host to act as its lock and key, the old evil was unleashed on Earth, the dark and stormy-looking cloud eventually overtaking an immobile Sam and Dean. Now the Winchesters have a new, troubling problem that doesn’t seem like it can easily be fixed by a spell. (Wish you stuck with the Mark now, don’t you, boys?)

Meanwhile, witchy Rowena used her magical prowess to compel Castiel to kill Crowley. As the two faced off against each other, it appeared a fight was imminent. Alas, the finale cut to another scene before we could witness if Cas would go attack dog on the King of Hell.

With two big issues facing the CW drama when it returns for Season 11 on Oct. 7, we invite you rewatch The Darkness invade before reviewing our poll options and sharing your predictions for how the cliffhangers will shake out.