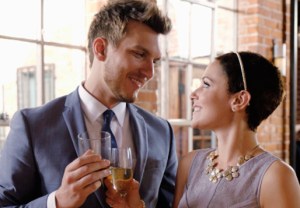 Chasing Life kicked off its long-awaited second season Monday, and because it’s not enough for April to merely juggle a wedding and a new career — you know, on top of her ongoing cancer battle — the writers also decided to throw the father of all curveballs at Ms. Carver.

I’m referring to the final moments of the premiere, in which Natalie stumbled upon a manuscript (“Chasing Life”?!) written by her father. This, of course, came after April learned she isn’t in remission, Natalie confronted Dominic about his residual feelings for his ex and April’s family voiced its collective concern about her impending wedding to Leo. It was a dramatic hour, even for the Carvers.

Below, executive producer Patrick Sean Smith offers some much-needed insight into the premiere’s biggest twists and previews more drama to come for April in Season 2.

TVLINE | Let’s start with April’s dream, in which she was still with Dominic. Why did you put that in there? What were you trying to say?
We’re entering uncharted waters for April this season, so we wanted to have a touchstone of what her life would be if she didn’t have cancer. It’s a reminder of what her ambitions were and what seemed to be in her future — and what isn’t now. We’re also reminding the audience what Dominic represents in April’s life and questioning how that’ll work in her future.

TVLINE | So it’s safe to say the love triangle is back on in Season 2?
We’re definitely ramping up the triangle this season, more than we have in the past. We needed time to dig deeper into April and Leo’s relationship in 1B and allow Dominic and April to heal from her betrayal of not telling him she was sick, then engage in a relationship with Leo so soon after their breakup. Once we were able to move past that, and the fact that Leo and April are engaged, it creates a ticking clock for Dominic in terms of realizing and accepting that he still has feelings for April. That window of opportunity is beginning to close, so is he going to do something about it?

TVLINE | I love that Dominic ended up being the first person to find out about the engagement.
And he was carrying a teddy bear! You’re just like, “Oh, you poor bastard. You have no idea what’s about to happen to you.” And that’s kind of the story of Dominic, unfortunately.

TVLINE | I was surprised by the little time jump, which didn’t allow us to see everyone’s initial reaction to the engagement. Did you just want to move the story along?
We wanted to, as much as we could, be authentic to what April would really be going through in her treatment. There was a lot of discussion about how involved we wanted to get this season with her life in the hospital, and we realized it was for the best to allow that time to pass. We acknowledged she was in treatment and is now back out in the world. A big part of everybody’s reaction, we thought, would be attributed more to “This is such a crazy notion. There’s no way she’s going to go through with this.” Emma got to voice that for everyone, which was hilarious. As far as the immediate reactions, we can’t imagine anyone would have been negative while she was still going through chemo. Once she was out, it picked up where people started to realize she is serious about it. 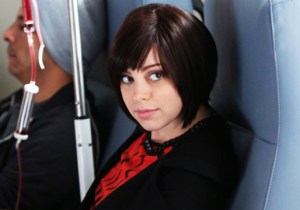 TVLINE | It took two seconds for me to love Krysta Rodriguez’s character. Please tell me we’ll be seeing a lot more of her.
We’ll definitely see more of Vanessa this season. [Rodriguez] has created this whole other energy in someone battling cancer than we’ve ever seen before. She really inspired us to write more for her, both from what she brought to her character and what she’s dealing with her real life as someone who’s been diagnosed with breast cancer and is going through treatment, herself. She’s an inspiration.

TVLINE | April is also on this kick of living life “differently.” Will Vanessa play a major role in that?
Sure. We’re starting April from this place of living life like you know you’re going to die, which we can all technically take a page from. You don’t have to have cancer to realize you’re going to die someday. While she’s pushing herself out of her comfort zone through the season, we wanted a voice that wasn’t Leo’s in the carpe diem sense, but somebody who says, “I decided to be selfish. If my days are numbered, I want to live them for me, not for somebody else.” It’s a lot of different questions that April is asking herself this season, and what that line is for her. What’s too selfish? What’s reckless and out of control to the detriment of her relationships? She’s trying to figure that out while experiencing as much as she can.

TVLINE | Lastly, let’s talk about Thomas’ book. Was that always something you were planning to introduce, and how will it affect everyone moving forward?
Not the book, specifically, but we knew we wanted to explore more of Thomas’ backstory. I feel like we really only scratched the surface in 1A; we didn’t touch it at all in 1B, outside of getting to know Natalie and having her become more a member of the family. We’ve always had this bomb of who Thomas Carver was, and that’s something we’re really going to get into this season. It informs so much of April’s journey in finding her new ambition in life past being a journalist. It’ll test the relationships of the sisters, as well as the relationship between Sara and George. It’s really become sort of a nice place to go to for present conflict, digging into the past and what happened during the events leading up to his car accident.

Your thoughts on the twisted season premiere? Grade the episode below, then drop ’em in a comment.