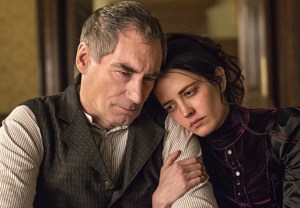 As thrilling as the second season finale of Penny Dreadful was — and, between the demon/Vanessa showdown, the Were-Ethan rampage and the Creature’s unique “contract negotiations” with his captors, it was pretty damn thrilling! — we still finished “And They Were Enemies” less excited about this episode than about the seeds planted for Season 3.

What can we expect? Read on. We’ve got a lot of ground to cover.

SOUL SURVIVOR | While Evelyn’s visions of Malcolm’s family and Victor’s “children” encouraged their patriarch and father figure, respectively, to kill themselves, the demon — speaking through the witch’s creepy Vanessa puppet — enticed its “beloved” with a peek at the life it could offer her as Ethan’s wife and the mother of his children. Though affected by the sweet scenario, Vanessa didn’t succumb to temptation. Instead, she began yelling in tongues, prompting the demon to do the same. When all was said and done — well, shouted and done — she’d shattered her doll’s face, trashed the showroom and robbed Evelyn of her most prized possession, her beauty. Watching as all of this unfolded, Hecate chose the moment before her mother attacked Vanessa to release Were-Ethan, and — just as the sneaky young sorceress intended — he killed Evelyn. (You slayed us, Helen McCrory!) However, the wolfman did not harm a hair on Vanessa’s head. On the contrary, he recoiled from her touch and ran off into the night. Finally, after Malcolm and Mr. Lyle shot the B-player witches — the latter with the priceless line, “Never underestimate the power of a queen with lovely hair, my dear” — they, Victor and Vanessa discovered that the evening hadn’t been a total success: Sembene was dead. As for the baddies, only Hecate emerged unscathed. When last seen, she had gathered up her mother’s tools of the trade and, on her way out the door, set fire to the house.

BIZARRE LOVE TRIANGLE | Returning home to find Lily gone, Victor made a beeline for Dorian’s place and (barely) lived to regret it. First, the former Brona mocked him so mercilessly that he shot her. “Please, creator,” she scoffed. “You made me too well for that.” So next, he shot Dorian. Also pointless. Finally, the doctor just listened in horror as the new power couple debated whether or not to kill him right then and there. In the end, Lily decided to leave him be, on the off chance that he might prove useful down the line. But — and here’s the Season 3 tease that we’re so stoked about — she didn’t just let him go, she let him go with a warning about the rise of the immortal “master race.” “When our day has come,” she said, “you will know terror.” (Can’t wait!)

THE MOMENT OF TRUTH | The following morning, Ethan and Vanessa came face to face for the first time since she learned of his true nature. Ashamed as he was, she wasn’t put off in the least. On the contrary, she suggested that when Malcolm left to lay Sembene to rest in Africa, they lock up the house and run away. Even if theirs were not the kind of troubles one could ever really escape, at least, they could walk the path together. And he clearly wanted to accept her offer of unconditional love — near-misses don’t come any closer than the kiss that he wouldn’t allow them to share. But, next thing we knew, he’d left her a note thanking her for her kindness and affection, and turned himself in to Rusk, who delighted in informing him that he wouldn’t be hung in London but extradited to the US.

HOUSE OF WHACKS | When the Putneys offered the Creature a deal — a little money and the chance to be let out of his cage occasionally, if only he’d do a few tricks for their customers and act as “a father to all the other freaks” — the softhearted monster snapped, broke out of his cell and brutally murdered the villains. Just then, down came Lavinia, every bit as awful as her parents. “You’re probably handsome in your dreams,” the blind girl taunted, unaware of the bodies on the floor. In spite of her complete and total horridness, the Creature let her live. Later, Vanessa — in need of a friend — sought him out at the shelter and learned that he was heading “away from mankind.” (As in Mary Shelley’s novel, his destination appeared to be the North Pole.) Since she, too, was at a sad crossroads, he invited her to join him. But, rather than inflict upon him the suffering that seemed to shadow her, she declined. Before they parted, however, she kissed his lips and said, “I think you are the most human man I have ever known.”

What did you think of the season finale? Won’t you miss the divinely wicked Evelyn? How hard are you shipping Ethan/Vanessa? Grade the episode below, then hit the comments!