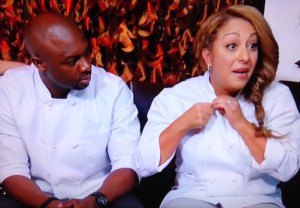 “My divorce was way prettier than what’s happening right now.”

The Food Network Star judges are always looking for colorful, spot-on descriptions of what’s on the plate, and dare I say no one nailed that task more accurately this week than Emilia — whose deep discomfort over the vitriol cooked up by reluctant partners Dom and Michelle very much mirrored how I felt watching from the safety of my living-room couch.

And yet while the Staten Island food-truck operator’s domineering sneer and the food-blogging mom’s “I’m taking my Greek yogurt and going home!” petulance proved less than appetizing, they weren’t the only ones whose Food Network Star-worthiness took a hit this week.

Arnold crinkling his nose about the “home cooks” who’ll make up his audience (and sweating during his presentation like he’d just spent a hard day on a boat hunting for the scallops he failed to sear)? No bueno! Front-runner Jay’s undercooked Bronzino and inconsistent pork tenderloin? Troubling! And Rue babbling about “joyful oneness” — without one joyful description of the flavor profiles she was delivering? As Super Nanny would say, “Unasseptable!”

Suddenly, the strongest Top 8 in show history is looking as dodgy as the week-old scallions congealing in the back of your crisper drawer. (Oh trust me, they’re there — right behind the wrinkled bell pepper!)

With that said, let’s run down the five main developments from this week’s episode:

* In the week’s first challenge, Alex’s credibility took a huge hit when he couldn’t name the components of “Five-Spice Blend.” Normally, this wouldn’t seem like such an outrage — except Alex listed it as one of his most cherished ingredients of all-time. Didn’t this chump think to do his homework after he completed his casting call?

* Emilia impressed me with her ability to throw shade at Arnold’s grainy puree and lackluster scallop while coming off like a food authority rather than a contestant attempting to throw a rival under the bus. She’s maybe a tad acidic, but there’s a playfulness that undercuts it — and makes me think her potential show might be fun if she starts it off with a cocktail.

* Eddie certainly maintained his status at the top of the pecking order with a delicious-looking jerk chicken and a cute anecdote about seeking out a Jamaican wife to line up with his favorite food — and learning more about the island nation’s Asian influences in the process.

* I was initially Team Michelle when Dom dismissed his partner in the Match.com partnership challenge, seeing how he wouldn’t pause for five seconds to pow-wow about their kitchen goals or treat her like a partner on any level. But her post-presentation threat to quit the competition had me wondering if perhaps she was responsible for some of the bad mojo, too. I’m glad she survived — Bobby’s point that her dish was the best-tasting of the Bottom 4 had to count for something — but given the finesse Dom has shown with his food (and his previously charming bashfulness) I wasn’t ready to see him exit either.

* With Dom and Michelle surviving, it was Rue — whose Southern African P.O.V. is intriguing on paper, but has never really come to life on screen — who got sent to the guillotine. To be honest, I’d have been just as happy had Arnold gotten eliminated — for a drag-queen party-food expert, he’s been less and less fun with each passing week — but I can’t argue with Rue’s ouster, either. This deep into the season, she needed to bring broilerrific heat rather than “30 seconds in the microwave on medium.”

What did you think of this week’s Food Network Star? Did the right person get eliminated? If not, who would you have axed? Sound off in the comments!