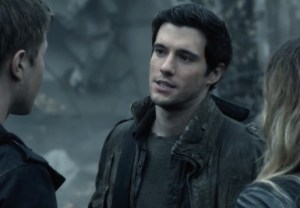 If you couldn’t quite get a read on the 2nd Mass’ reaction to Tom Mason’s “Find your warrior!” battle cry in Falling Skies‘ final season premiere, it’s for good reason.

According to Drew Roy, who plays Hal on TNT’s winding-down sci-fi drama, the cast itself was not sure what their individual characters were to make of their remarkably returned leader’s new attitude.

“In the stage direction, we were all supposed to be giving a ‘hooray,’ but on the day [we filmed it], we all sort of felt like, ‘You know what? I need to take in this situation and make sure Tom is sane as opposed to cheering him on,’ which I think came off in an interesting way,” Roy tells TVLine. “All the background [cast] is gung-ho, while pretty much every principal player is giving Tom this little sideways look, like, ‘Is he saying the right thing? Has he been possessed again? What’s going on?'”

Given how Tom intensely laid out his “take no prisoners” mantra, punctuated by his proffering of an Espheni’s decapitated noggin, Roy says with a laugh that not only was he worried for Tom, “I think Noah [Wyle] might have even been, when he first got those lines!”

Whether Mason’s eldest son falls in line remains to be seen, since, Roy Notes, Hal is now very much his own man, leading battalions and making tough calls.

“One of the best parts of playing Hal was how he had this long arc from the beginning to end,” the actor observes. “[In Season 1] he was just this hotheaded kid who would pretty much do anything his dad said. But in the past season and this season, I think he’s finally found his confidence. He has his own opinion about things. So, just because his dad is saying something or trying something, it doesn’t mean he’s necessarily going to go along with it.”

Of course, as the 2nd Mass launches this final campaign against the wounded Espheni, Hal will have matters of love as well as war to grapple with. In the season opener, Hal reiterated to Maggie his feelings, asking that she requite them by hurting his brother Ben and ending their Espheni spikes-sparked “relationship.” Maggie, however, maintained that she — and certainly not Hal — has control over her and Ben’s otherworldly connection.

“I don’t think he’ll ever be able to give up on [Maggie],” Roy says, “but he has decided, ‘Alright, this is just the new way in life. Apparently, she’s got something for my brother and vice versa. It’s above and beyond them, but I love them both so I’m going to have to let this be a part of our relationship.’

“But that’s easier said than done,” Roy warns. Rather, Hal’s latest heart-to-heart with Maggie “really cues us up for more of that love triangle this season.” (With reporting by Vlada Gelman)